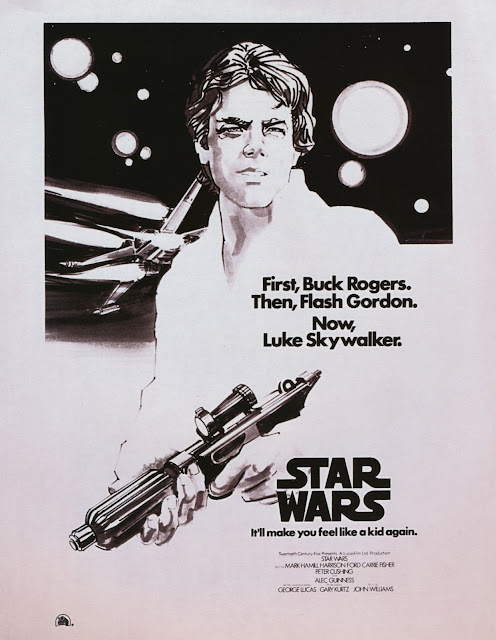 When it comes to Star Wars (and Star Trek) items, I've resolved myself to the fact that I'm not likely to dig up anything that's new to the die hard fans. But every once in a while, I do come across stuff that's new to me - like this early Star Wars advertising campaign concept art.

The graphic design is strong, and from a marketing perspective, it's an interesting approach. There was a lot of pop culture nostalgia in the air in the mid-Seventies, so I can see why someone at Fox might propose that angle as a way to sell George Lucas' space opera to the masses. Of course, what's so ironic about this is that it was the spectacular success of Luke Skywalker that paved the way for both Buck Rogers and Flash Gordon to return to the big screen over the next few years.

Posting here at Space: 1970 will probably be pretty light this week, as I will be concentrating on finishing up some comics writing work and some overdue DVD/Blu-ray reviews for my DVD Late Show website. Of course, if anything newsworthy should come up in the next few days, I'll be sure to let you all know.
Posted by Christopher Mills at 1:30 AM