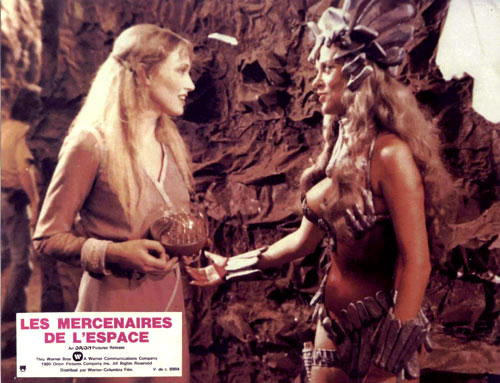 •  July was the biggest month ever here at Space: 1970, both in number of items posted and in traffic/pageviews. Somehow, after the relative blogging drought earlier this year, I managed to somehow come up with 49 posts in July - a personal best. Don't expect me to keep it up, though; I've got a big writing project on my desk this month (my first pulp novel) that will undoubtedly cut into my blogging activities. Still, I'll do my best not to neglect this site too much.

Over on Facebook, the Space: 1970 fan page surpassed 1,000 "Likes," while the blog itself garnered over 42,000 pageviews in July. Another milestone this month was the most generous Paypal contribution from a Space: 1970 reader yet - it allowed me to buy the second season of The Six Million Dollar Man far sooner than I'd anticipated, and made it possible for me to order the new Warlords Of Atlantis DVD from the UK. Look for reviews of both items here on the site soon. (BTW, if you'd like to contribute to the site, the "Tip" button is in the sidebar to the right, just beneath Princess Ardala - an enviable position, to be sure.)

I also want to thank every person who has used the Amazon links on this site to make purchases of vintage sci-fi on DVD/Blu-ray. Getting that little kickback from Amazon every month helps me rationalize all the time and effort I put into this otherwise non-paying endeavor. It really helps and is greatly appreciated.

•  Speaking of DVD reviews, I finally got my Invisible Man review up a few days ago. I'm about halfway through the Star Maidens DVDs that I ordered from England, so I should get a review of that series posted sometime this month. It's an "interesting" show, and I'm glad I picked it up.

•  Finally, the usual Blatant Cross-Promotion: Anyone who enjoys my writing and reviews on this blog  should check out my DVD Late Show site, where I have been reviewing B-movies, cult films and genre television shows on DVD and Blu-ray disc since 2005. Among the over 700 reviews are plenty of Space: 1970-era favorites, like Battle Beyond The Stars, Damnation Alley, Starcrash, The Starlost, the Space: 1999 Blu-rays, and many more.
Posted by Christopher Mills at 1:41 AM