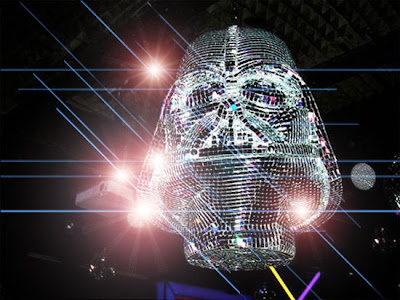 Let's face it: thanks to Meco Monardo, and his popular dance arrangements of John Williams' epic Star Wars themes, the science fiction of the late Seventies will always go hand-in-hand with disco music. 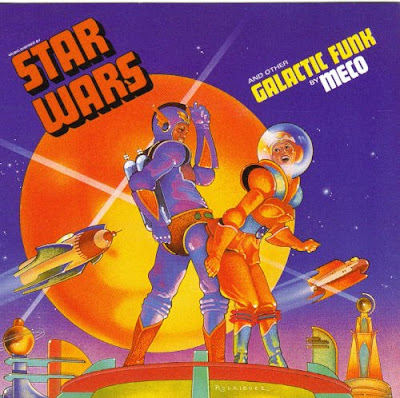 While that's a bitter pill for a lot of fans to swallow (I know one second-generation Star Wars fan who flat-out refused to acknowledge the existence of the Meco record), the fact is, I don't mind. I like disco, always have. And while I wouldn't want a steady musical diet of its thumping, mechanical bass line, neither do I object to the stuff in small doses. It's cheerful, and fun, and helps me remember my childhood.

I received the original Meco Star Wars And Other Galactic Funk LP as a birthday gift back in the day (still love that cover art!), and also picked up The Empire Strikes Back 45 RPM single a few years later. I vaguely recall having a couple of other disco "sci-fi" compilations on record and cassette over the years, too. 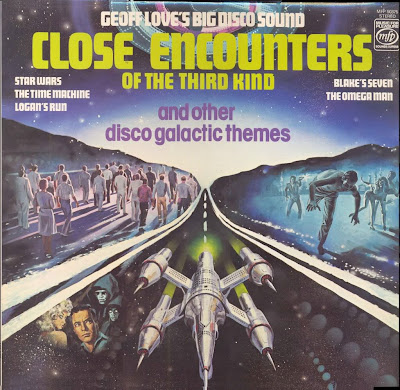 One I didn't own then was Geoff Love's Close Encounters of the Third Kind and Other Galactic Disco Themes. However, I recently stumbled upon a download of the album, and I can't seem to stop listening to it.

Aside from the CE3K theme, it also features a very catchy arrangement of the Logan's Run TV show theme, a couple of Star Wars themes, Blake's 7 (I really need to see some of those some day), The Omega Man (!) and couple of originals. Love and his orchestra recorded lots of TV and movie theme compilations, and many of them are quite good, but this one is my current favorite.

Oh, and yeah - that is a Darth Vader disco ball.

Disclaimer: These links aren't mine, I didn't upload the albums, and take no responsibility for 'em. I'm just posting the links for informational purposes.
Posted by Christopher Mills at 12:00 AM