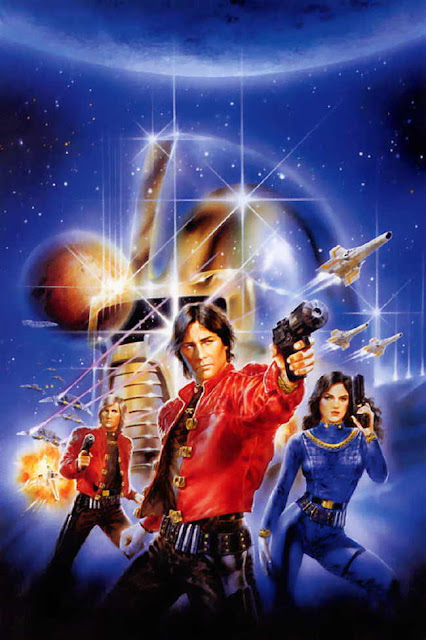 Back in the late 90's actor Richard Hatch ("Apollo") began writing, with a string of collaborators, a series of Battlestar Galactica continuation novels that picked up roughly twenty years after the end of the original television series. Presumably, these novels were based on his ideas for his proposed television sequel, Battlestar Galactica: The Second Coming. (In fact, not only the red flight jackets, but a couple scenes in the first two books, are identical to ones seen in his self-produced "trailer.")

The first two of these novels were published in 1997 by Pocket Books in both hardcover and paperback, and co-written by fantasy & horror writer Christopher Golden. Later books were co-written with other authors and published by iBooks. The initial novel in the cycle was called Armageddon, and featured this great cover painting by artist Luis Royo.

I've recently completed reading Armageddon and its immediate sequel, Warhawk, and am beginning on the third volume (co-written by Stan Timmons), Resurrection. I plan on writing up my reactions to these three books shortly.
Posted by Christopher Mills at 4:44 AM