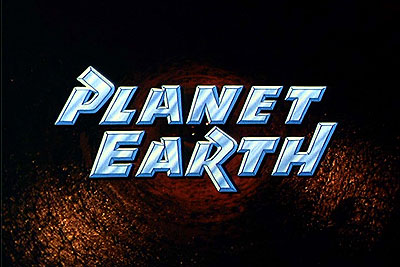 Not too long ago, I wrote about Star Trek creator Gene Roddenberry's attempt to launch a new science fiction television series in the early 1970s. Produced by Warner Brothers for CBS, Genesis II chronicled the adventures of 20th Century scientist Dylan Hunt, who awakens from a cryogenics accident to find a post-Holocaust Earth. Adopted by the peace-loving, scientific-minded people of PAX, he ultimately joins them in their mission to bring "civilization" to Earth's surviving populace.

Unfortunately, Genesis II didn't sell. In a repeat of the reaction to the first Star Trek pilot, the network brass found the show too cerebral, and felt that its hero (played by Alex Cord) looked and acted too much like a liberal arts college professor - one who probably slept with his students. (Okay, that's pure speculation. But I found him creepy.) CBS went with Planet Of The Apes instead.

But Warner Brothers wasn't ready to give up on the concept, and persuaded ABC to fund a new pilot. Roddenberry tried again. This time, he hired Star Trek veteran Marc Daniels to direct, collaborated with writer Juanita Bartlett on a more action-oriented script, and recast the character of Dylan Hunt. This time around, the character was played by John Saxon, who brought much more of a "Captain Kirk" vibe to the role. 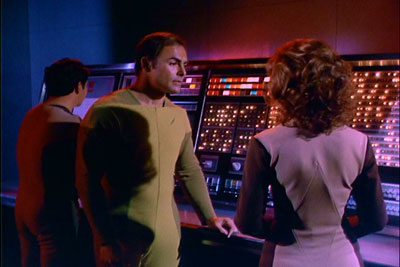 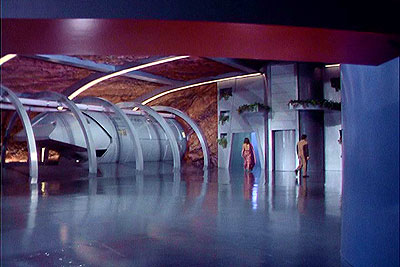 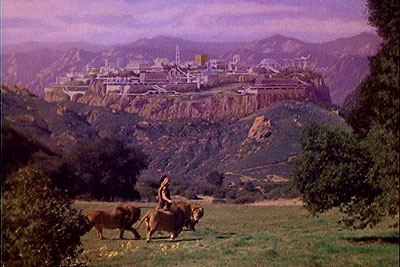 There were other changes, as well. In Genesis II, the people of PAX lived in an underground complex deep within Carlsbad Caverns, and wore clothing reminiscent of the hand-made togs of Medieval peasants (or hippies). In Planet Earth, PAX is an above-ground futuristic city, and its operatives wear form-fitting uniforms that greatly resemble the ones that appeared on Star Trek - The Next Generation a few years later. Their non-lethal stun guns are sleeker and more futuristic looking, and Hunt is shown using a Tricorder-like recording device in one scene. The underground subshuttle is carried over from the previous telefilm, but both its interior and the station from which it is dispatched have been given facelifts to make it look more, well, futuristic. 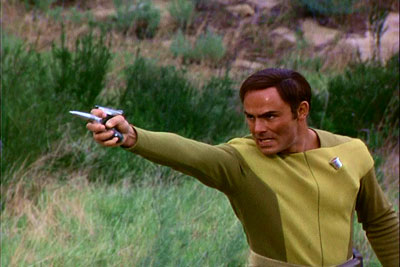 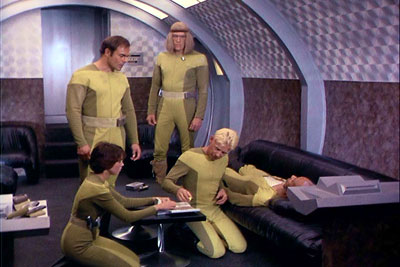 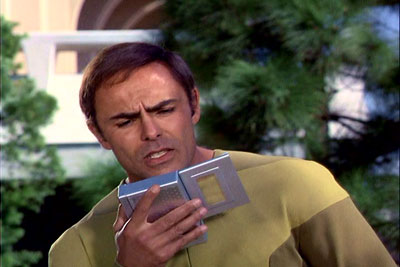 Instead of re-telling how Hunt ended up in the year 2133, Planet Earth jumps right into its story, with Hunt already established as the leader of a team of PAX operatives: the Dr. McCoy-like Baylok (Christopher Cary), noble savage Isiah (hulking Ted Cassidy, the only actor held over from Genesis II), and plucky Harper-Smythe (the incredibly cute Janet Margolin). They are being attacked by a band of mutant marauders known as the Kreeg - dark-skinned warriors with bony ridges on their foreheads (Hmmm....).  Hunt and his team flee the Kreeg, making for a hidden subshuttle station, but during the escape, an important PAX leader - Pater Kimbridge (Rai Tasco) - is severely wounded. Upon return to PAX, it is determined that only one surgeon can save the man, but he himself went missing on a mission some time before.

The search leads them to the Confederacy of Ruth, a matriarchal society where women rule and men are mere chattel, belittlingly referred to as "Dinks," and drugged into subservience by their mistresses. Hunt and Harper-Smythe attempt to infiltrate the Confederacy, with Hunt posing as Harper-Smythe's slave, but the leader of the group, a woman called Marg (Roddenberry favorite Diana Muldaur) claims Dylan as her own property. Hunt is then given "training" and prepared for auction. 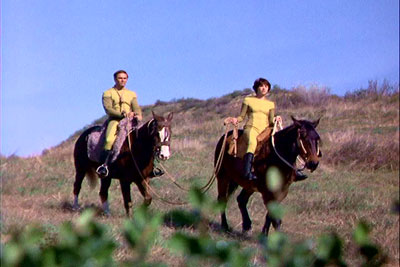 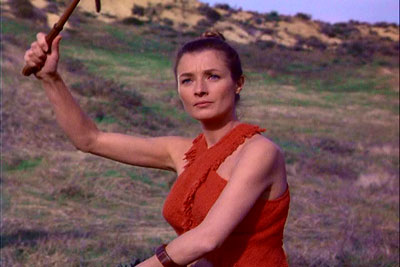 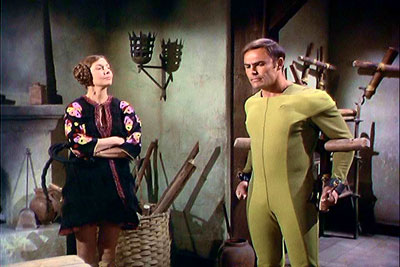 Of course, eventually Hunt and his team find the missing PAX doctor, persuade the women to change their ways, and fend off an attack of Kreeg raiders -- all while making rather obvious and heavy handed commentary about chauvinism. But it is to Roddenberry and Bartlett's credit that the teleplay avoids the obvious exploitation possibilities of the premise, and manages to make the women of the Confederation reasonably sympathetic. 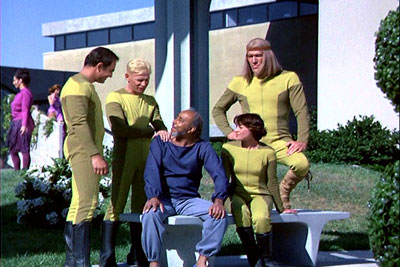 Planet Earth is my favorite of the "PAX Trilogy;" not so much for the plot, but for the look and tone of it, and the cast/characters. I much prefer Saxon's Dylan Hunt over Alex Cord's and I find Janet Margolin's Harper-Smythe remarkably attractive. Saxon is more traditionally heroic (which I like, frankly) and not only gets the opportunity to put the moves on Muldaur, but has a chance to show off some of his Enter The Dragon fighting skills during the climactic battle. 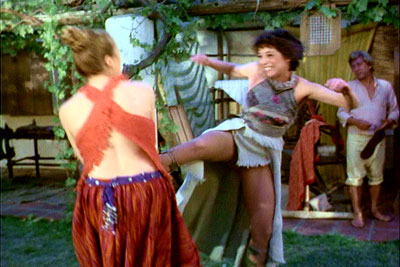 Marc Daniels brings professional polish and brisk pacing to the telefilm and the action sequences are very nicely-staged. Aside from the encounters with the Kreeg, there's a very well-done catfight between Muldaur and Margolin where it's clear that the two actresses are doing much of the stuntwork themselves (not all - doubles are used for a few long shots). 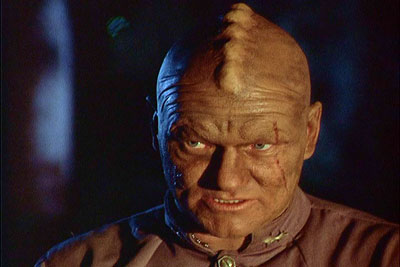 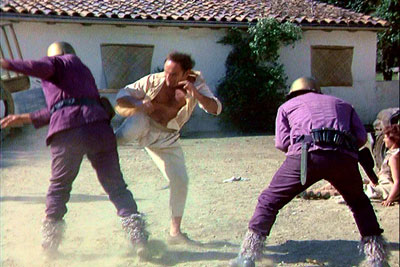 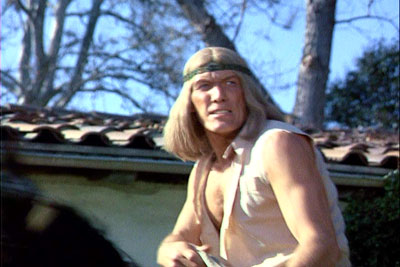 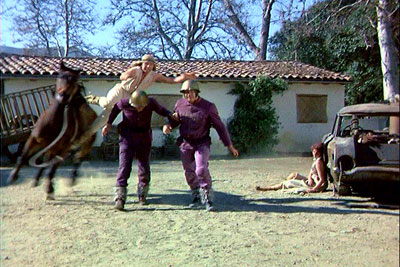 Unfortunately, as with Genesis II, the network passed on Planet Earth, and decided to develop The Six Million Dollar Man as a weekly series instead. Warner Brothers would give the concept one more shot the following pilot season, this time for NBC, but Roddenberry would not be involved. Roddenberry instead turned his attention to other series ideas, and would produce two more genre TV pilots (The Questor Tapes and Spectre) before returning to Paramount to develop the Star Trek II (also known as Star Trek: Phase II) television series.... which also would never get on the air, instead metamorphosing into The Motion Picture.

Like Genesis II, Planet Earth is available as a manufactured-on-demand, high-quality DVD-R from Warner Archive. The 1.33:1 transfer is remarkably sharp for an almost 40-year old TV movie, and almost completely devoid of dirt or other print damage. There are no extras. It can be ordered through the Warners Archive site or through Amazon: Planet Earth (1974 TVM)

I really like Planet Earth. As I said above, it's my favorite of the three tries at the concept, and it had a lot of potential. Ultimately, I think it's a really good 70's sci-fi pilot, and had it gone to series, I can guarantee you that 10-year-old me would have been perched in front of the tube every week, loving every minute of it.

John Saxon will return (though, not as Dylan Hunt)... in Strange New World, the final installment of the  "PAX Trilogy!"
Posted by Christopher Mills at 2:38 AM