•   Thanks to a couple of generous Star Kids who donated to the Space: 1970 fund, I've finally picked up the Universal DVD of 1972's Silent Running and scored a complete set of Project U.F.O. episodes. It's hard to believe that I didn't already have a copy of Silent Running in my vast video collection... but that oversight has now been rectified. One of these days, I'll get around to writing an article/review. 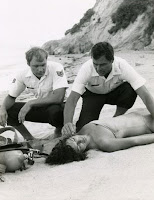 The unauthorized Project U.F.O. discs I have acquired are sourced from 80's Australian television airings (on the TV1 network), and all carry the original title. While a commenter has promised to send me screen captures to prove that the show did air as Project Blue Book in its second season in England... I'm still waiting. And that U.K. exception wouldn't explain why North American viewers remember it under that alternate title.  After watching nearly the whole series again, I'm convinced that people are simply misremembering - the characters in the show use the phrase "Project Blue Book" extensively, and I suspect that constant verbal reinforcement is what imprinted on young viewers' minds. 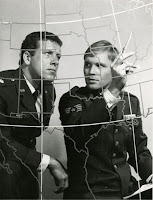 As for the show itself, the multi-generational bootleg copies I have look terrible - which is unfortunate because I can't really enjoy Brick Price's terrific spaceship miniatures - but the stories are far more engaging than I expected. I prefer first season lead William Jordan over the second season's Edward Winter - I think it's because I can't shake the image of Winter's M*A*S*H character, Colonel Flagg out of my head. I just find him "insincere." Jordan, on the other hand, is both warm and authoritative, and very convincing as an open-minded but rational investigator. Second lead Caskey Swaim is all Southern good 'ol boy charm, and it's a shame he didn't have much of a film/television career. 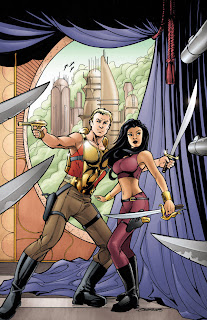 •  Other Projects Of Interest: Aside from blogging about old TV shows and movies, I occasionally write comic books. For a number of years now, one of the comic book projects I've been trying to get off the ground is a space opera graphic novel called Perils On Planet X.

While it owes a great deal to the interplanetary swashbucklers of Edgar Rice Burroughs (specifically, the John Carter of Mars stories) and his imitators (like Lin Carter, Otis Adelbert Kline, et al) it also incorporates plenty of influences from the sci-fi shows and movies of the Space: 1970 era, especially Flash Gordon (animated series and feature film), Blackstar, Buck Rogers, etc. The artist of Perils On Planet X is the very talented Gene Gonzales.

It is been in the works for a long time (several years, in fact), and it's roughly half finished. The current plan is to serialize it online in 2013 and perhaps try a Kickstarter campaign to finance a print edition. It's an action-packed adventure with rayguns, jetpacks, sexy space princesses, sexy alien pirate queens, and monstrous reptilian monsters. When it's ready to launch, I'll be sure to post the news here on the blog.

•  Blatant Cross-Promotion: And here's my usual shameless plug: anyone who enjoys my writing and the DVD reviews on this blog  should check out my DVD Late Show site, where I have been reviewing B-movies, cult films and genre television shows on DVD and Blu-ray disc since 2005. Among the over 700 reviews on the site are plenty of Space: 1970-era favorites, like Battle Beyond The Stars, Damnation Alley, Starcrash, The Starlost, the Space: 1999 Blu-rays, and many more.
Posted by Christopher Mills at 3:16 AM