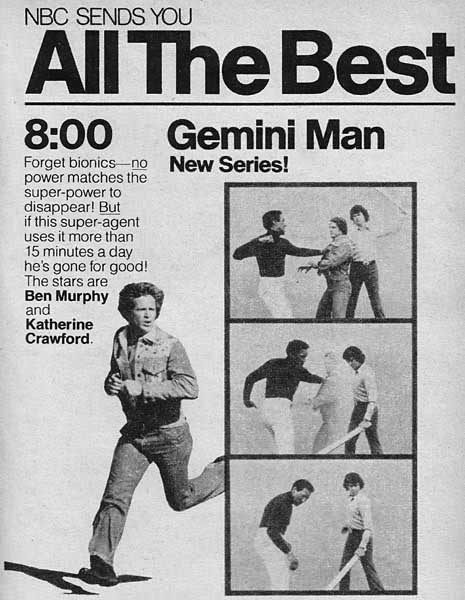 The Gemini Man: Sam Casey (Ben Murphy) is an agent for INTERSECT, a government think-tank and operations center specializing in secret missions. While on a diving assignment, Sam was irradiated by an underwater explosion. The radiation rendered him invisible, but INTERSECT devised a way to control his invisibility, by fitting him with a computerized watch that kept him visible. He could, however, shut it off, and become invisible again, for short periods of time. If he did this for more than 15 minutes in any 24 hour period he would die. 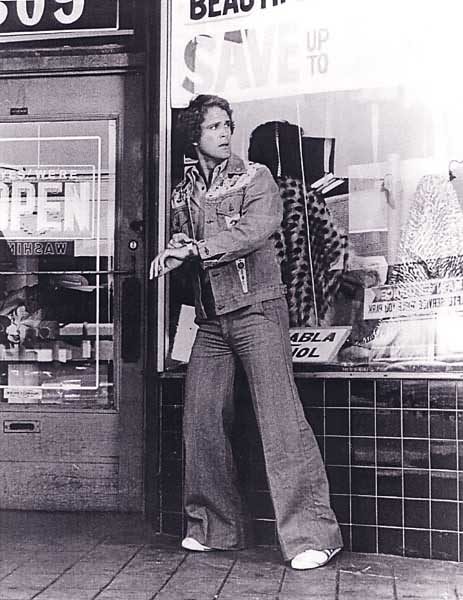 Only two month after the demise of Universal's The Invisible Man, this variation on the same theme debuted on the same network, under the stewardship of the same producers, Harve Bennett and Steven Bochco... so I think it's fair to look at it as a "retooled" version of the same show.

Unlike David McCallum's intellectual (and married) Daniel Westin, Sam Casey was a bell-bottom bluejeans/denim-shirt wearing, hunky "everyman" in the Steve Austin mold, and not tied down by the bounds of matrimony. But that wasn't enough to bring in viewers, and Gemini Man folded quicker than its predecessor, cancelled after airing only five episodes.


Eleven episodes were shot in all, and were shown in syndication (and later on the Sci-Fi Channel), and a couple were edited together into "movies" for TV and home video release (one of these was skewered by the 'bots of MST3K in one of it's later seasons).

I was not a fan of this show... and I haven't seen an episode since the Spring of '76. One of these days, I guess I'll need to revisit it.
Posted by Christopher Mills at 3:01 AM