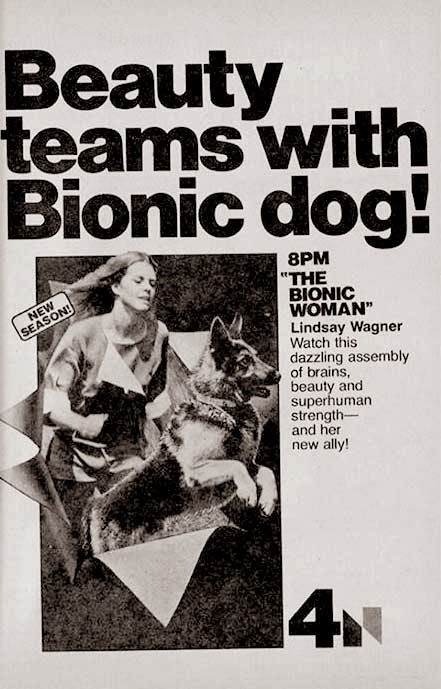 When The Bionic Woman switched networks in its third year from ABC to NBC, it debuted with the surprisingly affecting tail - I mean, "tale" - of cyborg canine Maximillian, Dr. Rudy Wells' (Martin E. Brooks) first bionic test subject. The million-dollar dog (Max-a-million, get it?) was experiencing psychological difficulty adjusting to his bionic prosthesis, and only Jaimie Sommers' patience and compassion could save him from being put down by an uncharacteristically cold Dr. Wells.

While that week's TV Guide ad makes the episode look like kid-friendly fun and games with a super-powered pooch, the episode is surprisingly emotional, due, in large part, to Lindsay Wagner's usual fine, empathic acting. I really like this one, and was pleased by the addition of Max to the bionic brigade.

(Not coincidentally, my dog is named Max, too.)
Posted by Christopher Mills at 2:58 AM 5 comments:


Here's a vintage commercial for Mego's Star Trek Phaser Battle electronic game, which the narrator assures us is "the most exciting game ever!" I never had this, but it looks, well, amazing.

Of course, from what I've read online, it appears that it was very difficult to play, took six (!) "D" batteries, and was not very well constructed, breaking easily. It also was very expensive, selling for around $70 in 1976 dollars! (According to an online inflation calculator, that would come to nearly $300 today!)