I was deeply saddened to read of the passing of actress/dancer Yvonne Craig earlier this week. The delightful Ms. Craig was the Space: 1970 "Space Babe" in June of 2011, earning her place in that august assembly for her portrayal of mad Orion slave girl Marta in the Star Trek episode, "Whom Gods Destroy." But she was best known as the caped and cowled Batgirl on the 1966 television incarnation of Batman, starring Adam West and Burt Ward.

While Batman was definitely a 1960s show, and beyond the purview of this blog, I'm slipping this video in on a technicality. In 1973, she and Burt Ward reprised their roles as Gotham City defenders for a Public Service Announcement regarding the Equal Pay Act. Adam West declined to participate, so Dick Gautier (who played the robot "Hymie" on Get Smart), donned the cape and mimicked West's trademark deadpan delivery. The PSA aired well into the decade, and I remember seeing it once as a kid, late at night, and wondering why Batman seemed different.

Anyway, it's a nice showcase for Craig's charm - I love her graceful little spin toward the ticking time bomb. She's already missed.
Posted by Christopher Mills at 12:54 AM 7 comments: 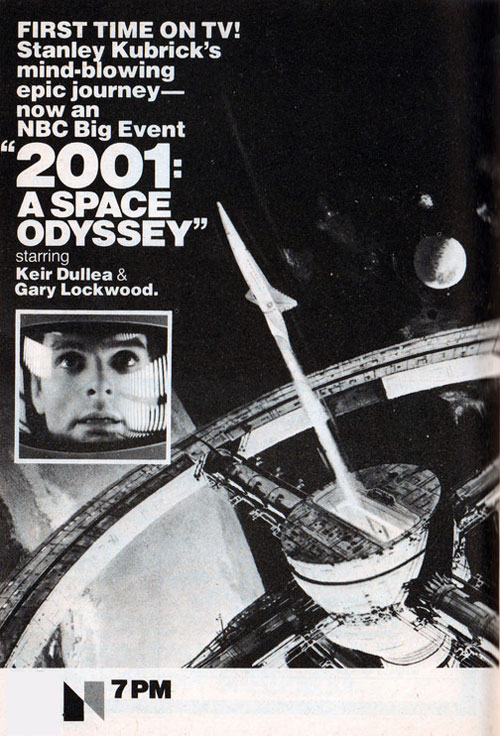 It took nearly a decade for Stanley Kubrick's mind-blowing 2001: A Space Odyssey to air on U.S. network television, finally making its broadcast premiere on February 13th, 1977, on NBC's "Big Event." I remember it clearly, because I begged my folks to let me stay up and watch it (spaceships), but they only agreed to let me watch until my regular bedtime, as I had school the next day. On the east coast, it started at 8 PM, and my bedtime was nine (hey, I was only twelve!).

So... I only got to see the whole "dawn of man" sequence and maybe the PanAm shuttle docking with the space station before being hustled off to bed.

Now, at the tender age of twelve, I probably would have struggled mightily with the deliberate pace of the film and lack of action, but I was already a spaceship special effects junkie (thanks to Star Trek and Space: 1999), and was deeply disappointed that I didn't get to see more of the actual "space odyssey." 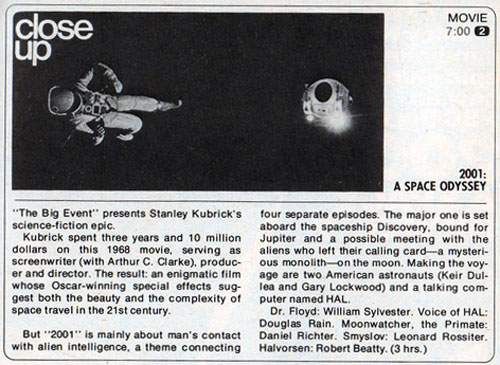 I didn't actually see the entire movie until I was at art school in '83 or '84, watching it in pan & scan on my tiny portable B&W television set. I didn't see it widescreen until it came out on DVD.
Posted by Christopher Mills at 1:04 AM 16 comments: