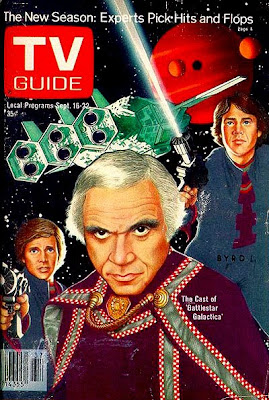 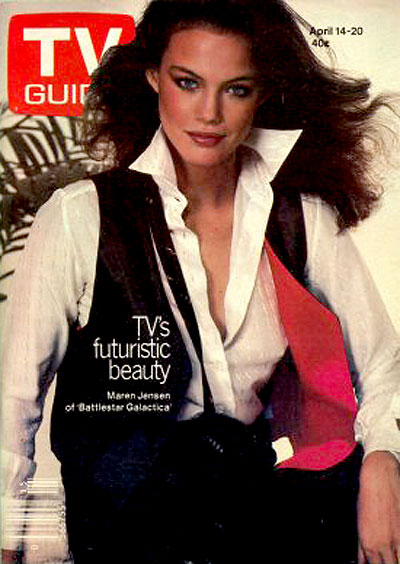 Even as a kid, I thought that top TV Guide cover by "Byrd" was really odd - the likenesses of the Battlestar cast are okay, but just a bit "off." (And the spaceship is clearly not anything from the show - it looks like the artist used a shot of 2001's  Discovery and just changed it slightly!)

On the other hand, there's nothing even remotely off-putting about the Maren Jensen portrait. Damn, she was gorgeous!
Posted by Christopher Mills at 5:35 AM 10 comments:

Now Playing: FLASH GORDON: THE GREATEST ADVENTURE OF ALL (1979)

I wrote about this hard-to-find and barely remembered television movie back when I reviewed the Filmation Flash Gordon animated series. Well, I've just discovered that someone has posted the entire movie on YouTube in nine parts, so here you go. Enjoy.
You can view all nine parts after the jump:

Read more »
Posted by Christopher Mills at 2:00 AM 7 comments: 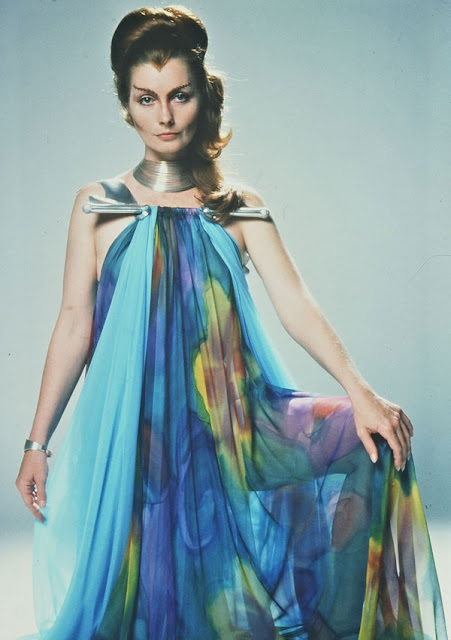 Stunning Catherine Schell as the shapeshifting Psychon Maya, the token alien from the second season of Space: 1999. No matter what your opinion of producer Fred Freiberger's handling of Year Two, there's no question that the lovely Ms. Schell made a very fetching extraterrestrial, despite some decidedly unflattering (and inconsistent) make-up. Despite what I've heard fans say, she did not have "sideburns," although what exactly the brown, airbrushed markings that accented her perfect cheekbones were supposed to be is something I guess only Freiberger and her make-up artist knew for sure. 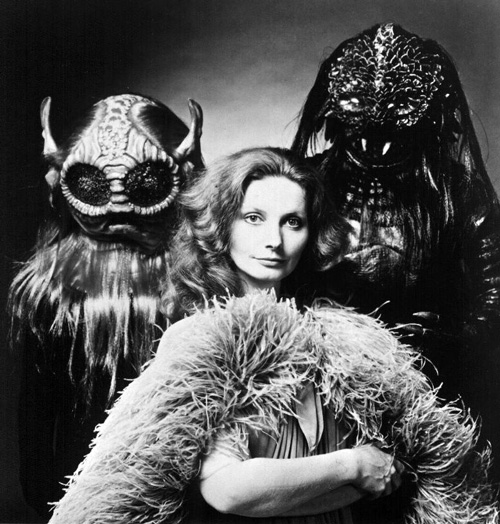 I've always liked the character of Maya, even if her addition to Space: 1999 contributed to the unfortunate (IMO) change in the series' tone. Schell always managed to be charming and likeable despite the contrived nature of her character and the ridiculously low-tech "effects" that signified her metamorphoses. And even with that absurd make-up, she was gorgeous.

Born in Budapest, Hungary, her real name was Katherina Freiin Schell von Bauschlott, and she appeared in dozens of films and television shows between 1964 and '94. Her science fiction credits include a memorable appearance in the Doctor Who serial "City of Death," and a co-starring role in the 1969 "space western," Moon Zero Two. It's rumored that she was the producers' first choice to play Captain Janeway on Star Trek: Voyager in 1995, but obviously, she didn't get/take the part.

Anyone know what she's up to these days?

Posted by Christopher Mills at 4:51 AM 9 comments:

Obviously you've already noticed - unless you read this blog though an RSS feed - that I've changed the site template and some of the graphics. I wanted to make Space: 1970 a bit more distinctive, and allow for slightly bigger images, etc. (I still would like to figure out how to load my own starfield background image into the new Blogger template, but I'm pretty stupid about coding.)

I've been occupied with other things of late - primarily my freelance comics writing and my main DVD review site - and I'm afraid this blog has suffered some benign neglect. I have not abandoned it, though, and actually have a couple of long articles in incomplete drafts waiting for me to finish them up. These include two "Favorite Episodes" features (one from Buck Rogers in the 25th Century and one from Space: 1999) a review of the 1978 Spaghetti space opera snoozefest War of the Planets, and some Planet of the Apes reminisces. I also have been thinking about The Black Hole (witness the new masthead) and Spacehunter, the first (and I think last) 3D movie I've seen in a cinema.

According to my counters, traffic remains pretty steady here at Space: 1970, so let me thank all of you who keep dropping by. There's a lot on the way - I haven't even begun to scratch this particular nostalgic itch - it's just a matter of making the time to write my ramblings down. Stay tuned....
Posted by Christopher Mills at 4:44 PM 3 comments:


Here's a TV spot for Spacehunter: Adventures In The Forbidden Zone (in 3D!). The audio is kinda low, so you may need to crank up your speakers. I think I'll try and watch this again soon... and maybe write up a review/article. It's about time I got back to this blog....
Posted by Christopher Mills at 5:07 AM 3 comments: 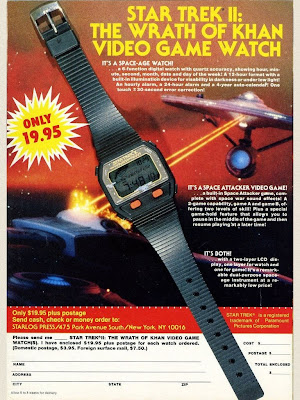 Ah, the wonders of technology, circa 1982. Another treasure that I didn't have because I couldn't afford it. Oh, Starlog, why did you tease me so?

Thanks to Marty McKee for reminding me....
Posted by Christopher Mills at 3:59 AM 4 comments: 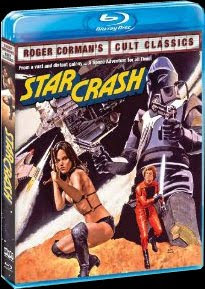 I'm still finding it difficult to believe, but Shout! Factory will be releasing Luigi Cozzi's Starcrash on DVD and high-definition Blu-Ray disc on September 14th.

I've long lamented that there wasn't a good, authorized DVD edition of this personal favorite available, and the thought that in a few months I'll have a copy on Blu-Ray is just so exciting. Ever since I read Cozzi's article about the making of the film in Future magazine (anyone remember that companion mag to Starlog, later known as Future Life?), I've been fascinated with the film, and when I finally saw it on VHS with some friends around 1990, I couldn't believe just how much giddy, shameless, stupid fun it was.

There isn't much I don't love about the movie, to be honest. Caroline Munro is gorgeous, the special effects are psychedelic, the characters so ridiculous... it's pure, rainy Saturday afternoon bliss.

In any case, it looks like it's definitely on the way - Shout! Factory has released the cover art - and the title is already listed at Amazon for pre-order. In fact, you can use the link below to do so, if you're so inclined.