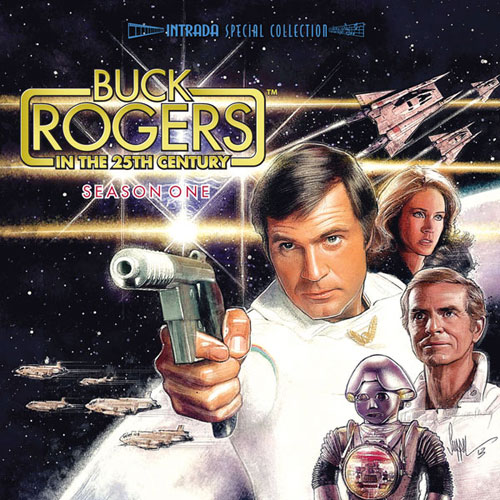 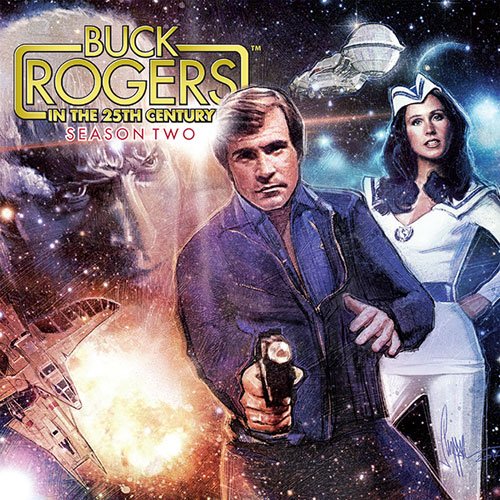 A couple years ago, Intrada released two multi-disc CD collections of incidental music from both seasons of Buck Rogers In The 25th Century. The two volumes represent pretty much all of the original musical cues composed by Stu Phillips, Johnny Harris, Les Baxter, Bruce Broughton and several others for the 1979-80 NBC space opera series.

They've gotten a bit hard to find, and are expensive when you do, but they come highly recommended, as they transport you back to Buck's 25th century and provide hours of nostalgic listening.

Today's post, though, is primarily to showcase the gorgeous cover art by Paul Shipper. They're great illustrations.
Posted by Christopher Mills at 9:26 AM 6 comments: I’m one year older than Star Trek. Of course, as memories of my early years are lost to the fog of infancy and toddlerhood, I don’t recall really becoming aware of its existence until I was about nine years old, when, in 1974, the Star Trek animated series became a staple of my Saturday morning cartoon viewing. Around the same time, I received a Mego Captain Kirk action figure for Christmas. Other random Trek toys – and a few James Blish paperback novelizations – followed, and for Christmas of 1976, my favorite cousin gifted me with a copy of Bjo Trimble’s seminal Star Trek Concordance.
You’ll have noticed that I haven’t mentioned the original series as yet, and that’s because, in the early Seventies, Trek rarely appeared on any of the four television channels our rooftop aerial was capable of snagging out of the ether. So my love for Kirk, Spock, McCoy, et al, was first nurtured via the cartoon and Blish paperbacks. When I got the Concordance, with its encyclopedic coverage of the classic series, I was able to familiarize myself with the episodes I had not yet seen, whetting my appetite to the point of nigh-insatiability.
Of course, eventually, I saw the entire series (although a few of those episodes eluded me until my sojourn to art school in Jersey in the early 80s, where I finally received a TV channel that aired the show nightly), and, already well-indoctrinated in the mythos, found my passion for the 23rd century and the crew of the U.S.S Enterprise continuing to grow and thrive. Then came The Motion Picture, The Wrath and The Search. There was a Voyage Home, a somewhat disappointing detour into The Final Frontier, and an emotional denouement on the shores of an Undiscovered Country.
Other treks followed, with next generations, lost voyagers and denizens on the edge of deep space, but it was always the (sadly truncated) original Five-Year-Mission that inspired and informed the person I became.
I learned the value of reason and logic from an alien with pointed ears and a Satanic visage. I learned the nobility of humanity and compassion toward all life, regardless of shape, color or form, from an anachronistic Southern medic. And, most importantly, I learned about the worth of boldness, courage, and tempered wisdom from a charming leader with a confident swagger sporting a gold tunic. Kirk was a fighter, a diplomat, a philosopher - and a libidinous wolf – but in my eyes, he was the best of us as a species. He wasn’t perfect – and to his credit, usually admitted his flaws and acknowledged his mistakes – but he was also a man of intelligence and action, who sought out brave new worlds and always had his eye on the future.
I have aspired to all of these things, and usually fallen woefully short. But Star Trek continues to fire my imagination, fuel my creative efforts, inform my social conscience and drive my personal ambitions. To me, it’s not just a television show, and apparently, many, many others feel the same way. If that wasn’t the case, then we wouldn’t be celebrating the anniversary of its debut fifty years ago today. The brand wouldn’t be gracing new movies and TV shows (regardless of their relative merits) on our screens, large and small(er). And Star Trek wouldn’t still be sparking imaginations and inspiring so many people, of all ages and backgrounds.
May Gene Roddenberry’s vision of humanity’s future live long and prosper... and the U.S.S. Enterprise and her valiant crew go boldly on forever.
Posted by Christopher Mills at 3:14 PM 12 comments: