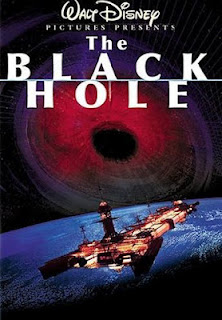 Another glimpse into the life of an aging Star Kid:

I've had the Anchor Bay DVD of Disney's 1979 space opera The Black Hole ever since it came out back in 1999. While the disc does include a widescreen version of the movie, it was not enhanced for 16x9 displays. That was fine for me back in '99 - I didn't have a 16x9 TV. But I do now, and last time I tried to watch the disc, I was really annoyed by the lack of anamorphic enhancement.

So, anyway, I have a birthday coming up, so I ordered myself a copy of the Disney DVD re-issue of The Black Hole that came out in '04. I know that it has one bonus feature (a behind-the-scenes featurette) - which is one more than the AB disc had - and an anamorphic widescreen transfer, so it is something of an upgrade.

And yes, I am well aware that the '04 disc wasn't restored or remastered, so it still contains all the visual flaws and is basically the same transfer as the earlier Anchor Bay edition, but... at least it will display properly.

Once I told my wife that I'd purchased a second "upgraded" copy of the movie she looked at me and said, cynically, "You know, now that you've spent money on it again, they're probably going to announce a Blu-ray version."

I smiled and replied, "Man, I hope so."
Posted by Christopher Mills at 7:49 AM