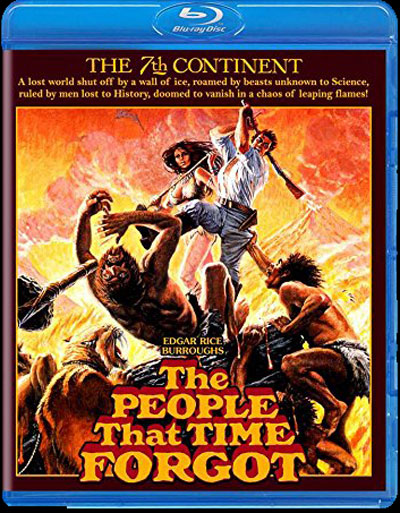 The sequel to American-International's Doug McClure lost world epic, The Land That Time Forgot, 1977's equally epic The People That Time Forgot, is now available on Blu-ray in the U.S., courtesy of Kino-Lorber & Scorpion Releasing. It hit store shelves on Tuesday and I picked up mine yesterday.

The Blu-ray features a very colorful and detailed 16x9 widescreen transfer of the John Dark-produced fantasy film and it looks quite spectacular. Bonus features include an audio commentary by director Kevin Connor and filmmaker Brian Trenchard-Smith, on-camera interviews with actresses Sarah Douglas and Dana Gillespie, and trailers for both this film and its precursor.

It's a very fine presentation all around and highly recommended for fans of the John Dark-Kevin Connor adventure series.
Posted by Christopher Mills at 1:23 AM 4 comments: 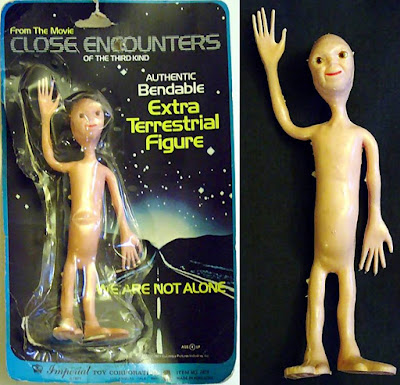 There wasn't a whole lot of Close Encounters merchandise released to tie-in with Steven Spielberg's UFO epic - a novelization, a Warren souvenir magazine, a few other odds and ends - at least, not compared to other sci-fi blockbusters of the era, and certainly not a lot merch aimed at kids.

One exception was this cheerful extraterrestrial "bendy" from rack toy specialists Imperial. All things considered, it's a pretty fair likeness of CE3K's featured alien, goofy smile and all.
Posted by Christopher Mills at 11:39 AM 12 comments: