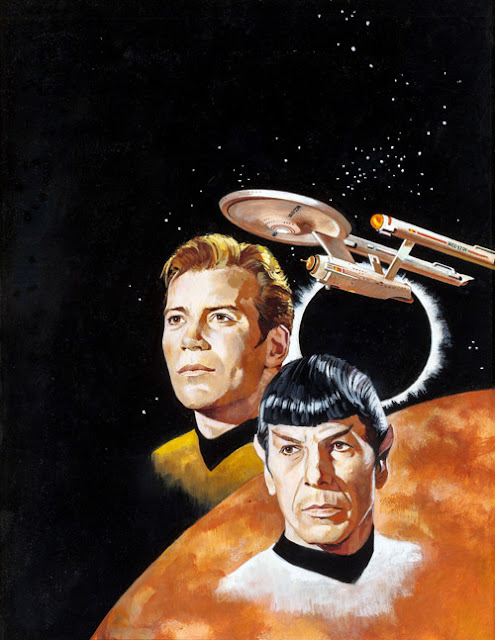 Ahh... this stunning cover painting of Star Trek's Captain Kirk and Mr. Spock by Jack Thurston graced the first issue of Starlog magazine, back in August, 1976. Which means that this month marks 40(!) years since the debut of the 70's greatest science fiction media periodical, a magazine that was literally my bible for two decades.

(Actually, as former Starlog honcho David McDonnell points out in the comments below, the first issue actually went on sale in June of that Bicentennial year. I stand corrected. Still... better late than never!)

Starlog not only kept me informed of new and upcoming genre films and television, but opened my mind to the classic (and not-so-classic) productions of the past. It was in the pages of Starlog that I first discovered the films of George Pal, the television series of Irwin Allen, and the original Buck Rogers and Flash Gordon movie serials. It fed my insatiable hunger for behind-the-scenes information on special effects and gave me countless cool photographs of miniature spaceships and alien monster to obsess over.

Yeah, Starlog was an important part of my formative years... in many ways, the biggest part.

In retrospect, maybe I should have called this site Starblog...?
Posted by Christopher Mills at 3:35 AM 22 comments: