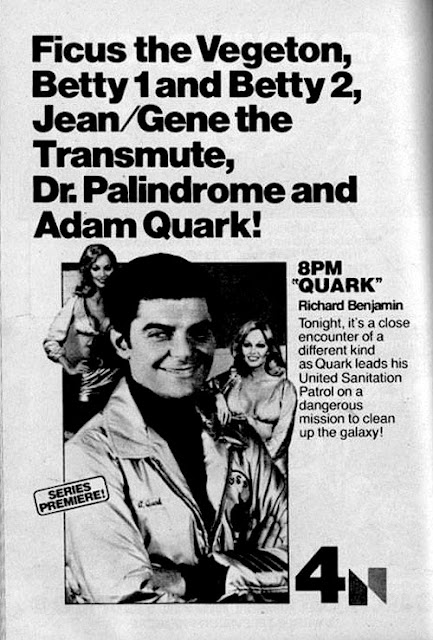 Here's the original NBC TV Guide ad heralding the debut of the short-lived sci-fi spoof, Quark, on February 24th, 1978. This hour-long series premiere - "May the Source Be With You" - came almost nine months after the pilot episode, which had aired the previous May.

As I've opined on this blog before, I think the show had a lot of potential, even if the handful of episodes aired were decidedly uneven in quality. I sincerely believe that had it received a full season to work out the kinks, it could have become something a lot more memorable.
Posted by Christopher Mills at 3:06 PM 4 comments:

Back in 1978, producer and special effects artist Mark Wolf dropped by the studio where the team of Stephen Czerkas and Jim Aupperle - both veterans of Planet of Dinosaurs - were slaving away producing stop-motion animated sequences for Filmation's ambitious live-action Saturday morning space opera, Jason Of Star Command. During his visit, he snapped these exclusive, behind-the-scenes photos of the monster of the week - an insectoid alien with an electric tongue(!) featured in the first season episode, "Planet of the Lost!" 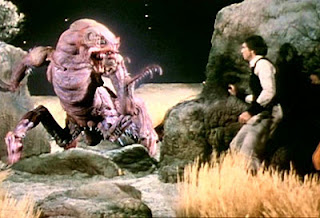 The Jason monster designs and filming models were outstanding (as the photos show) and the animation always top-notch... even if the animators, due to the network's restrictions on violent action, found their work extra challenging at times.

According to Mark, "I recall Steve and his partner, DP/animator Jim Aupperle, both remarking about how the show went to extreme lengths not to do anything too violent, which put a crimp in delivering anything  too  dramatic for Saturday mornings.  I believe it was Jim who said, 'How are the humans supposed to fight-off the monsters?  Use harsh language?'"

As fans of the series - which I'm guessing is pretty much every reader of this blog - knows, the effects work on Jason was truly exceptional, going far above and beyond anything else produced for Saturday morning kid shows of the time. Much of the work was of feature film quality. Even today, most of it still holds up, especially the imaginative (and plentiful) stop-motion alien monsters.

Special Star Kid thanks to Mark Wolf for sharing these photos with Space: 1970.
Posted by Christopher Mills at 12:15 AM 4 comments: