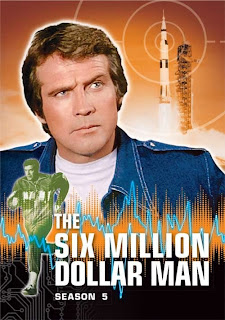 For those of us who didn't buy the deluxe, Time-Life complete series set of The Six Million Dollar Man a few years ago, the good news is that the fifth and final season of the show will be receiving its standalone DVD release on February 18, 2014 from Universal Home Entertainment:

In Season 5 of this science fiction cult classic, the dangers are never greater and the assignments never more impossible as Steve Austin tackles national security threats on land, beneath the sea, and beyond the stars.

The six-disc set has a suggested retail price of $39.95, and will not contain the extra disc of bonus material included in the Time-Life edition.

Posted by Christopher Mills at 7:08 PM