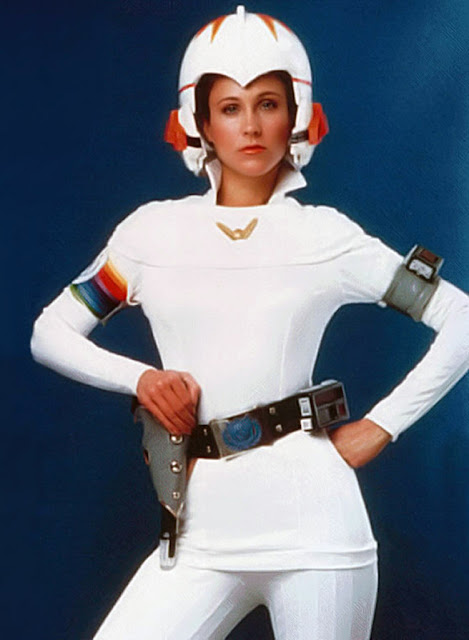 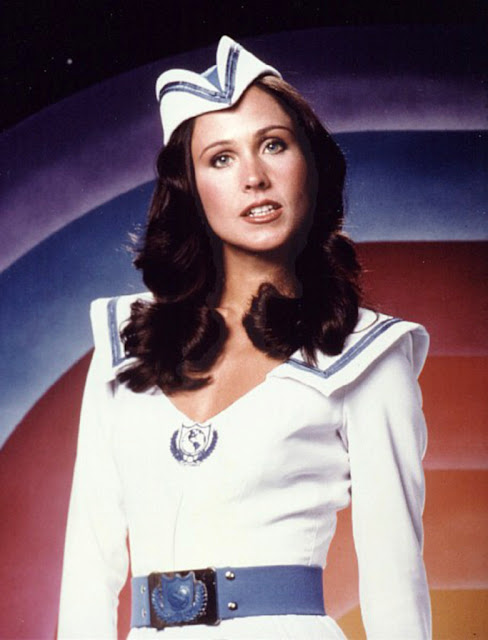 While I don't hate (too strong a word to describe my disappointment) the second season of Buck Rogers In the 25th Century, I do despise what the producers and writers did to Erin Gray's character of Wilma Deering. In the first season, she was a military professional, portrayed as competent, courageous, and compassionate, with a charmingly sly sense of humor. Her form-fitting uniforms accentuated her sexuality, absolutely, but they also seemed somehow more empowering than exploitative. (Especially since most of the men dressed the same way.)

In the second season, her character became considerably less interesting. Whereas in the first year, she had been one of the top-ranking officers (if not the top-ranking one) of Earth's Defense Force, year two had her assigned to the crew of the Searcher starship, where her duties were ill-defined, but usually involved opening hailing frequencies, looking worried, or sweating a lot while she waited for the men to save the ship from the peril of the week. We rarely saw her on missions, and I don't think she even piloted a fighter once in the whole second year. Her uniform - complete with skirt - made her look like a drive-in carhop.

Erin Gray is an icon of the Space: 1970 era, not just because she looked stunning in spandex, but because her Wilma Deering, while not always served well by the scripts, was still a memorably strong character. Over the 21 episodes of Buck's first season the actress managed to convincingly portray a genuine evolution from cold, remote military automaton to a warm, humorous, full-blooded woman, equal to the series' male lead in every way. Hell, the best-written moment of the season's last episode had Gray's character come right out and acknowledge that evolution... and Gray nails the scene.

That sort of character work was especially rare in network television of the era.

Too bad that when the re-tooled series came back for its second year, Wilma's character regressed to the stereotypes of 50s and 60s sci-fi, narratively subservient to the male characters, dressed in outfits that emphasized the sterotypes of her gender, virtually reduced to window dressing in the background.

I mean, there are a lot of problems with Buck's sophomore season, but it's the treatment of Gray's character that irritates me the most.

And... this has been your aging fanboy rant for the week. Funny, I started out just wanting to post a couple of publicity shots of the lovely Ms. Gray (because, let's face it - that's what most people come here for in the first place), but the differences between the outfits (and character attitude) in the two stills just started to get under my skin....
Posted by Christopher Mills at 1:36 AM