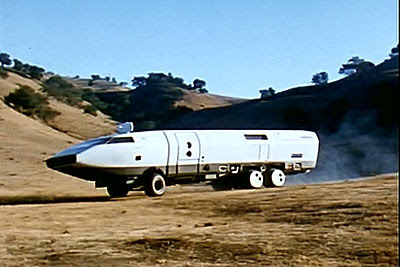 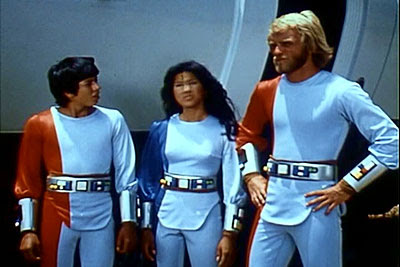 Even as a kid, I thought that Ark II was a surprisingly bleak and grim premise for a Saturday morning children’s television series.

Set in the 25th Century, after the world has been devastated by pollution and war, three multi-cultural young scientists (Terry Lester, Jean Marie Hon, and Jose Flores) and their talking chimp, Adam, roam the post-Apocalyptic wasteland in a super-advanced RV, bringing the benefits of science and good morals to the primitive remnants of humanity. That’s right – it’s Damnation Alley for adolescents! 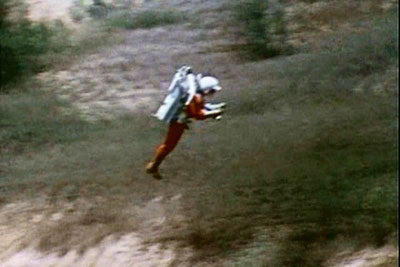 Surprisingly, the show holds up pretty well. Despite the low budget, the production values are quite good, and the Ark and its accessories are pretty impressive gadgets, even today. Probably the most impressive gadget – besides the Ark itself – was a genuine Bell jetpack. Filmation secured the services of a jet-pack and pilot for an afternoon, dressed the guy up like Terry Lester, and shot as much footage of him zooming around as possible, footage they later reused repeatedly throughout the series. Still – it was cool and undeniably real, instead of an unconvincing bluescreen or rear-projection effect.

Shot on location at the old Fox Ranch, the producers managed to evoke a fairly convincing post-Apocalyptic world, even using some decrepit sets left over from the original Planet Of the Apes features! And, as I mentioned in my Space Academy review, Bill Malone’s Robby the Robot guest starred in an episode, which is always a plus for me. The earnest young cast manages to play their underwritten roles with conviction, and, thankfully, the chatty chimpanzee (voiced by frugal Filmation head Lou Schiemer) is never all that annoying. 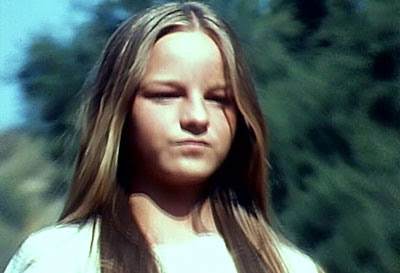 Scripts range from quite good to insultingly bad, but are usually somewhere in the middle, and despite the grim setting, the stories all offer hope and a solid moral lesson. Fortunately, these "lessons" are not quite as heavy handed as in later Filmation shows, and are delivered without the usual sledgehammer tactics. Guest stars include Jonathan Harris, Malachi Throne, Geoffrey Lewis, Jim Backus and a teenaged Helen Hunt.

Like the other Filmation live-action sci-fi kidvid series Space Academy and Jason of Star Command, Ark II was released a few years ago on DVD by BCI. That original set is out of print – and BCI is out of business – but just before the company closed shop, it released all three series in one box set. Both editions are still available if you look around for them. 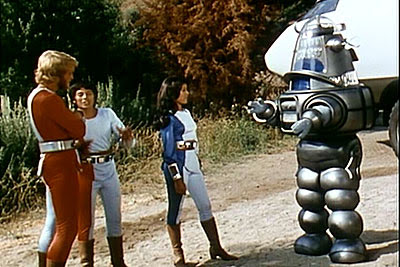 The Ark II set contains all 15 episodes on 4 discs. Unfortunately, the transfers are not very impressive. Presented in their original full-screen TV aspect ratio, the source material, originally shot on inexpensive 16mm film stock, is faded and grainy, although relatively free of damage or debris. Still, considering that the show is nearly 30 years old, and was probably shot on a budget of $100 bucks an episode, we’re probably lucky the episodes look as good as they do.

As with the company’s other Filmation releases, Ark II – The Complete Series comes with an bunch of bonus features, including audio commentaries on two episodes, a full-length "Making Of" documentary, several photo and art galleries, and all 15 scripts, plus the series bible, on DVD-ROM.

Ultimately, Ark II is good kid’s show with a still-timely environmental message and a relatively decent example of 70’s TV sci-fi, and I really enjoyed watching these episodes again. If it’s a fond memory from your childhood, you may want to pick it up, despite the less-than-reference-quality transfers.
Posted by Christopher Mills at 1:10 PM