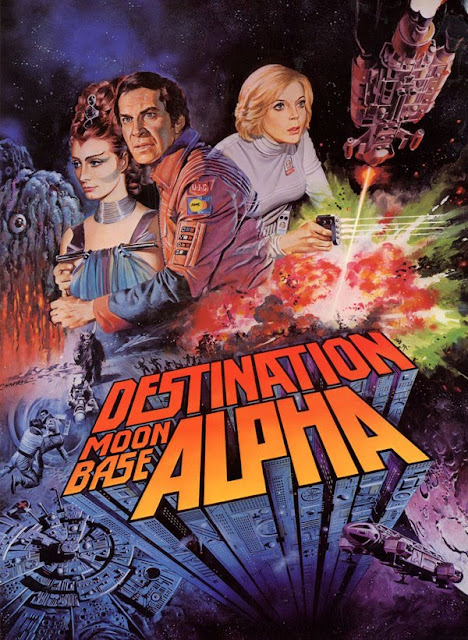 Science fiction TV is expensive to produce, and studios like to try and recoup their investments as many ways as possible, so, like Battlestar Galactica and the Planet of the Apes television series, Gerry Anderson's Space: 1999 also saw several of its episodes edited together into "feature films" for TV syndication, international theatrical exhibition and home video. There were four of these (as far as I know): Destination Moonbase Alpha, Alien Attack, Journey Through the Black Sun and Cosmic Princess. 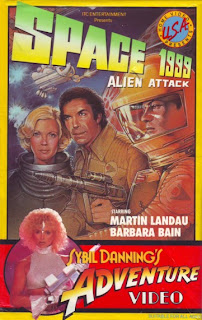 The quality of the films varies. Two were assembled by the ITC in England and some care and thought appears to have gone into their execution. Reportedly, the other two were put together by the company's New York office, and suffer from some poor editing choices, cut-rate titles and the addition of some bad library music or mismatched musical cues from other Gerry Anderson shows like Joe 90 and UFO.

Living in Maine during the Eighties, where the series did not air in reruns, there was no other way for me to see any Space: 1999, except for renting the VHS tapes that U.S.A Home Video released under the "Sybil Danning's Adventure Theater" label. This was intended as a companion line to their Elvira-hosted horror tapes, with the statuesque B-movie starlet wearing odd costumes and giving brief, goofy intros to the films. It was in this format that I saw Destination Moonbase Alpha (my first real exposure to second season 1999, in fact) and Alien Attack.

After the jump, I'll break down which Space: 1999 episodes were edited into which movies, and show the trailers created for each.


Destination Moonbase Alpha was comprised of the Year Two 2-part episode "The Bringers of Wonder" with new opening titles and music by Mike Vikkers, and a few other minor alterations. Here's the theatrical trailer:

Alien Attack was edited together from the classic first season episodes "Breakaway" and "War Games," although the 1999 setting was changed to a more futuristic 2100! Added scenes featuring actor Patrick Allen were added, providing an opportunity to see what was happening on Earth when the Moon was knocked out of orbit. Here's the trailer:

Journey Through the Black Sun was cobbled together from the Year One episodes "Collision Course" and (obviously) "The Black Sun." Unlike the first two "telefilms," this one was created by ITC's American offices, and isn't quite as well put together. The opening titles are awful, and the editing is a bit slipshod. Here's the trailer:

And, finally, also from the U.S. office, there's Cosmic Princess, made up of two of the better second season installments "Metamorph" and "Space Warp."
Posted by Christopher Mills at 4:49 AM