Daley's novels are set in the Star Wars universe just two years before the events of Star Wars (1977 - I refuse to call it "A New Hope"). The trilogy follows the smuggling days of Han Solo and Chewbacca as they ply their trade in an area of the Empire known as the Corporate Sector, accompanied by a droid named Bollux. The books were released April, June and August 1979 respectively. They also were published as an omnibus edition in 1992.

When these came out, licensed Star Wars continuations were still a rarity outside of the Marvel comic book, and it was almost as big a deal as Alan Dean Foster's Splinter Of the Mind's Eye. I bought all three books as soon as I could - the first in paperback and the other two in hardcover through the Science fiction Book Club - and read and re-read them dozens of times. Han Solo was pretty much my favorite character in the movie - still is - and although I wasn't a big fan of Bollux (or his companion Blue Max), and didn't quite grasp the concept of the "Corporate Sector," I was just thrilled to have new Solo adventures to read. 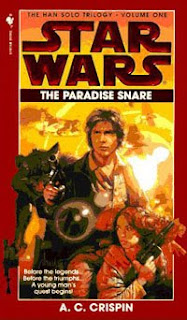 In Han Solo At Star's End, our favorite Corellian smuggler has to break Chewbacca and some other allies out of the Corporate Sector Authority's covert prison facility, the titular "Star's End." In Han Solo's Revenge, Han and Chewie break up a slavery operation, and in Han Solo And The Lost Legacy, they go off in search of a legendary lost treasure ship, Queen of Ranroon.

These books were a big part of my adolescence, so I was pleased (and surprised) to discover from Wikipedia that events of these books have been incorporated into the official timeline of the Star Wars universe by "being contextualized in interludes in Rebel Dawn, the final book of Ann C. Crispin's Han Solo Trilogy."

Which is a book I haven't yet read, although I expect to shortly. I did buy a copy of Crispin's first Han Solo novel, The Paradise Snare, back when it first came out in '98, but never got around to reading it until about a week or so ago, when I finished re-reading the Daley trilogy. I actually rather enjoyed it - The Paradise Snare is a chronicle of Solo's early years up until he enrolls in the Imperial Academy - and ordered the other two books through an online dealer who had used copies for a penny apiece. I expect them to show up any day now.

After that, I'll probably try and get my hands on the "The Adventures of Lando Calrissian" novels by L. Neil Smith, which were published way back in the early 80s. I've always been curious about Lando's adventures as master of the Millennium Falcon... although I doubt they'll be as much fun as THIS.
Posted by Christopher Mills at 12:00 AM