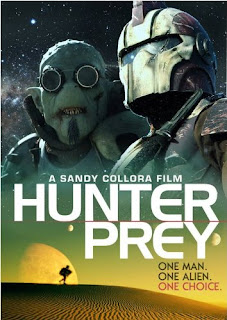 I generally don't write about modern sci-fi films here unless they are sequels/remakes/re-imaginings of genuine Space: 1970-era stuff, but after reading about Sandy Collora's Hunter Prey over on Retrospace, where blogger Gilligan praised it for its 70s sci-fi "feel," I decided to rent it from Netflix.

A prisoner transport ship crashes on an uncharted desert planet, and the prisoner - the last of its species and possessor of a secret that could destroy a world - escapes.The three survivors of the ship's crew set out to recapture the alien as they await rescue. But their fugitive is cunning, resilient and ruthless, and before long, there are only two players left in the deadly game of extraterrestrial cat-and-mouse - one hunter and one prey... but which is which?

For a reported budget of less than a half-mil, shot on high-def RED digital cameras, Hunter Prey is a remarkable achievement, especially for its microscopic (in Hollywood terms) budget, 17-day shoot and less than 20-man crew. The basic premise is familiar, borrowing from John Boorman's Hell In The Pacific (or, in sci-fi terms, Enemy Mine), but the execution is exemplary. Director Sandy Collora, whose Batman fan-film, Dead End, was a Comic-Con and Internet sensation a few years back, has crafted a thoughtful, intelligent, character-driven science fiction adventure that harkens back to the SF flicks of the 1970s and early 80s.

With virtually no money, Collora and his collaborators make great use of some extraordinarily well-designed costumes & props, cool alien prosthetic make-ups, old-school miniature spaceship effects, deftly-executed & restrained CGI, remarkably otherworldly & masterfully-shot Mexican locations, and a handful of talented actors to assemble a visually striking and expensive-looking feature that deserves to be a lot better known.

The screenplay, by Collora and Nick Damon, is well structured, with a series of perfectly-placed revelations and twists that put a decidedly different spin on the otherwise familiar premise. The dialogue is smart and witty, and the script is peppered with clever in-jokes and references for fans of vintage sci-fi and comic books. The performances by Damion Poiter (an actor/stuntman) and Clark Bartram (another actor/stuntman, who portrayed the Caped Crusader himself in Dead End) are surprisingly good, making their characters sympathetic and engaging. Erin Gray (of Buck Rogers in the 25th Century) also provides a great voiceover job as a computer with a personality and pivotal role in the plot. The music by Christopher Hoag evokes the best of Jerry Goldsmith, and perfectly underscores the action and drama.

It's not perfect - how could it be? The story is a bit thin for a feature, and some of the dialogue (especially in the beginning) is a little repetitive, but Collora demonstrates a distinctive visual flair and a real love/appreciation for the genre, and that makes Hunter Prey especially worthwhile in this era of microbudget "sci-fi" that seems exclusively the domain of megafish and supersnakes.

The DVD from Maya Entertainment sports a crystal-clear and razor-sharp 2.35:1 anamorphic widescreen transfer and 5.1 Dolby sound. Bonus features include an informative and enthusiastic audio commentary by the director, and an entertaining, comprehensive behind-the-scenes documentary.

For fans of 70s-styled science fiction -and if you're reading this site, that's probably you - Hunter Prey is highly recommended.

Posted by Christopher Mills at 4:38 PM