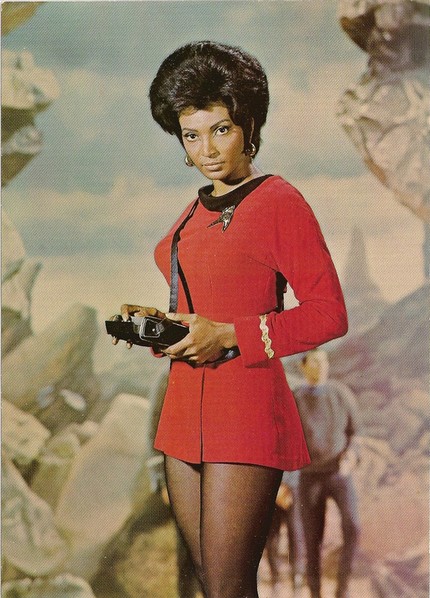 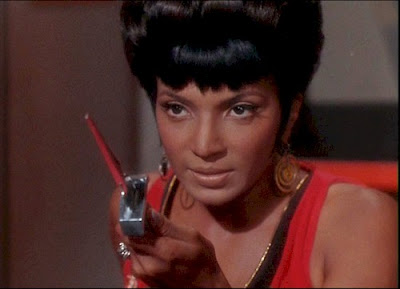 The first Space Babe of 2011 is none other than Nichelle Nichols as Lieutenant Nyota Uhura, the curvaceous, competent communications officer of the original starship Enterprise on Star Trek. Beautiful, sexy and charismatic, Nichols portrayed one of science fiction's first female interstellar professionals.

She was a full-fledged, commissioned officer on a starship, and not just a pretty face to scream in the face of danger, make coffee for the men, and be rescued from bug-eyed monsters. The character was pretty much always portrayed as an expert in her field and an exemplary officer - and could even hold her own in a fight. She stood up for herself, and while she wasn't afraid to admit when she was scared, she also showed uncommon courage and pride in herself and her abilities. It is to both to the writers' and the actress's credit that Uhura also exhibited a sense of humor, unabashed sexuality and an artistic, musical soul.

Nichols, whose 78th birthday was just a few days ago (December 28), is an accomplished singer and actress, who has worked for NASA helping to recruit women and minorities into the space program, and has written music, poetry and fiction. She reprised the role of Uhura on the Star Trek animated series and six feature films, as well a few video games.

Here's a link to her official website. (Though it hasn't been updated in years, apparently.)
Posted by Christopher Mills at 6:35 AM