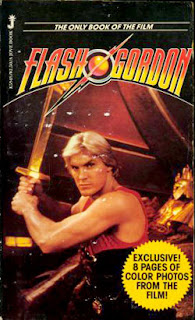 Not too long ago, I read Arthur Byron Cover's novelization of the 1980 Flash Gordon movie for the first time, and found myself entertained - and occasionally appalled - by Cover's frequently lurid embellishments to the Lorenzo Semple screenplay.

For example, while Cover (a well-regarded science fiction writer) goes to great lengths to try and explain the unique nature of the improbable planetary system encompassing Mongo and its plethora of inhabited, bowl-shaped satellites, his adaptation also establishes that Dale Arden had a penchant for 70's New York swingers clubs and group sex before being shanghaied to Mongo. He further strongly implies that Emperor Ming's relationship with his daughter Aura is incestuous and ongoing.

I'm not a prude - far from it, in fact - but, man, I wonder how many junior high school-aged fans of the film picked up the paperback and had their adolescent minds blown by those lascivious revelations?

I'm currently reading the 1979 Buck Rogers tie-in novel, That Man on Beta, by Richard Lupoff (writing as "Addison Steele") and based on an unfilmed teleplay by Bob Shayne. Clearly written before the weekly television show premiered (and its bible established, apparently), the book explores various elements from the pilot film that were never really followed up on once it went to a series. It is also riddled with inconsistencies that suggest that at the time it was written, the author hadn't even seen the finished pilot movie yet. 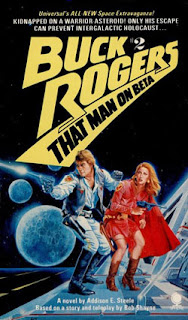 Twiki can't speak in this book, for instance, communicating solely in beeps and squeaks that only Doctor Theopolis can interpret (very much like R2-D2 and C3PO). Additionally, Theopolis himself is described as a square box, rather than the plastic alarm clock that the film prop resembled. And Doctor Huer is described as wearing glasses!

I'm only about a third of the way through it, but so far, all of the action takes place in "Anarchia," the post-holocaust wastelands outside New Chicago (here called the Inner City, as in the pilot film). This is an element from the pilot that was never followed up on once it sold; in the original movie, it's pretty clear that there is only one, domed city on Earth, and that the rest of the planet is a barren wasteland, inhabited by mutants and savages. I suspect that Glen Larson and Leslie Stevens - neither of whom actually had much to do with the subsequent TV show - may have originally intended for Buck to have occasional Earthbound adventures encountering various post-Apocalyptic survivors, in the vein of Roddenberry's Genesis II or Planet Earth. but, once Buck actually went to series, that idea was abandoned in favor of pure Star Wars-styled space opera, and we even saw other cities on occasion. This book also makes big deal of the computer council that runs the Inner City, but aside from Theopolis, we never saw any of those "guys" again on the show.

One thing the book does do, however, is remind me of just how much Gil Gerard brought to the character. On TV, with Gerard's charm and easygoing approach to the role, Buck came across as a likable wiseass. In cold print, though, he just seems like a dick. Of course, the story has him doing a lot of dickish things, like lying to Huer and Wilma about his unauthorized ventures outside the city and actually trading Theopolis to an Anarchian "gypsy" (who speaks in CB jargon - groan) for a minor bit of information. It's not a trick or ploy, either - Buck simply sees the artificial intelligence (one of Earth's ruling council!) as just a piece of disposable machinery.

Anyway, while the story and characters don't jibe with the show, it's still kind of a fascinating book. I'm curious how it turns out....
Posted by Christopher Mills at 5:40 AM