A few quick notes from the bridge:

•  I just received the first two books in the 1980 Tempo Flash Gordon series by David Hagberg. Thanks to everyone who helped me track these down. Once I finish That Man on Beta, I'll start on these. If I like them, obviously, I'll be trying to acquire the remaining four. Hopefully, they'll be easier to find - and less expensive - than the 70s Avon Flash novels.

•   Still no updated word from Shout! Factory on the Battle Beyond the Stars DVD/Blu-Ray that they originally announced for September - at least, none that I've heard. I'm going to guess that they're having trouble finding a high-quality source print - the one used for the old New Horizons disc was pretty beat-up. If anyone hears anything definitive, please report in! I've been holding off writing much about the film until the new disc came out, but I'm wondering if I should stop waiting. Usually when I post a review here of an old product, a new version is announced within a month.... 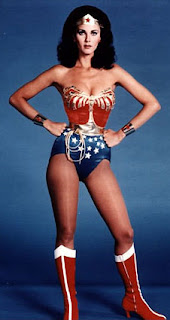 •   I haven't been re-posting every news item from TV Shows on DVD site for The Six Million Dollar Man Complete Series set from Time/Life, so here's a link to the site's $6MM news page, where you can find shots of the final packaging, complete details, etc. LINK.

•  Here's a question for you: should I cover 70s superhero shows on the site? There are some shows here that are on the cusp already - Man From Atlantis, The Six Million Dollar Man, The Invisible Man - but would it be of interest to those of you who read the site if I also occasionally wrote about shows like Isis, Wonder Woman, The Incredible Hulk, etc.?

I've been on the fence about it. It would broaden the scope of the blog and give me more stuff to wax nostalgic about (not to mention putting Joanna Cameron and Lynda Carter in the running for the Space Babes feature), but I wonder if it would broaden it too much, since the site has had a sci-fi focus so far. Anyway, your opinions would be welcome.

• And, finally, apropos of nothing, I'm now on Twitter: @AtomicPulp.
Posted by Christopher Mills at 2:25 AM