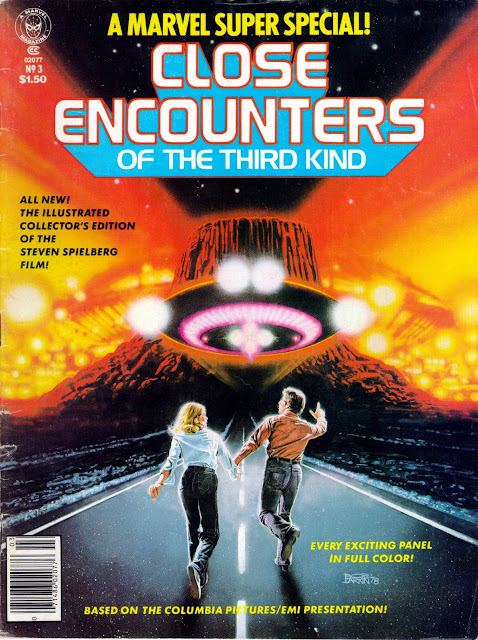 Another seminal 70s sci-fi classic that I have so far neglected on this blog is Steven Spielberg's Close Encounters of the Third Kind, quite possibly the greatest UFO movie ever made. Along with Star Wars, CE3K (as the genre mags referred to it), really changed the face of science fiction films forever. No longer were sci-fi films relegated solely to B-movies and exploitation filmmakers - with that box office double punch, space movies stepped up to the A-list, with every major studio determined to field their own special effects-heavy blockbuster.

Marvel Comics had really lucked out with their decision to pick up the Star Wars license, and were duly careful not to let any other potential hits slip through their fingers. Hence, this magazine format comic adaptation of Spielberg's film, published as the third issue of their Marvel Super Special title.  Later issues would feature adaptations of Battlestar Galactica, The Empire Strikes Back, Star Trek - The Motion Picture... and Xanadu(!), among others.

I no longer have this comic, but I wish I did. the script was by the great Archie Goodwin, and the art was by the always awesome team of Walter Simonson and Klaus Janson. (Interestingly, Goodwin & Simonson also adapted Alien for Heavy Metal.) The cover painting above is by Bob Larkin, a prolific painter of covers for paperback novels (including a few Star Treks for Bantam Books) and comics magazines.
Posted by Christopher Mills at 3:47 AM