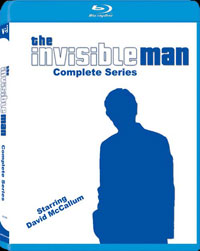 According to an article a couple weeks ago (sorry it's taken me so long to report it here) at the TV Shows On DVD website, VEI of Canada will be releasing both DVD and Blu-ray editions of the complete 1975 The Invisible Man television series, starring David McCallum, Melinda Fee and Craig Stevens, in the U.S. on May 1st, 2012.

The 12-episode series was originally scheduled to be available in Canada on DVD & Blu-ray in October, but that release has been delayed until February, 2012.

The show, which was a variation on the Six Million Dollar Man formula by way of H.G. Wells (co-produced by the bionic franchise's own Harve Bennett), cast McCallum as Dr. Daniel Westin, a researcher who is permanently rendered invisible in a lab accident. This makes him an ideal covert agent, and he's soon going off on secret missions with his supportive wife, Kate (Melinda Fee) for a private think tank called KLAE.

As a kid, I really enjoyed the show, and am looking forward to revisiting it on disc.

Posted by Christopher Mills at 1:21 AM