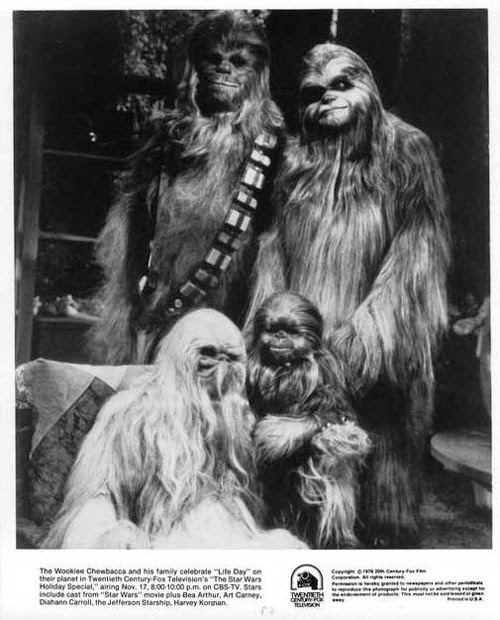 Yesterday marked the 36th (!) anniversary of the much-derided Star Wars Holiday Special, which aired on CBS in 1978. Sure, I've kicked the bizarre variety special around some myself over the years, but I admit that I was watching it that night, sitting on the floor about two feet from the tube, and fourteen year-old me enjoyed the hell out of it. And if truth be told, whenever I pop in my bootleg DVD to torture the wife each holiday season, I still enjoy it.

Well, parts of it, anyway.

That awesomely strange cartoon, of course, introducing to the universe the intriguing Boba Fett. Some (very little, admittedly) of the domestic wookiee stuff. (And the Stan Winston wookie suits are fantastic and full of character.) Mark Hamill's heavy makeup. Harrison Ford, trying to stay in character and keep a straight face amid the nonsense. And I genuinely enjoy Bea Arthur's musical number - and whoever thought I'd admit that?

The less said about Carrie Fisher's singing, on the other hand, the better.

When the only Star Wars was Star Wars, (and the Marvel comics) even this bizarro Seventies artifact was something to look forward to and even celebrate. Have yourselves a happy (belated) Life Day and may the Force be with you, Star Kids!
Posted by Christopher Mills at 1:22 PM