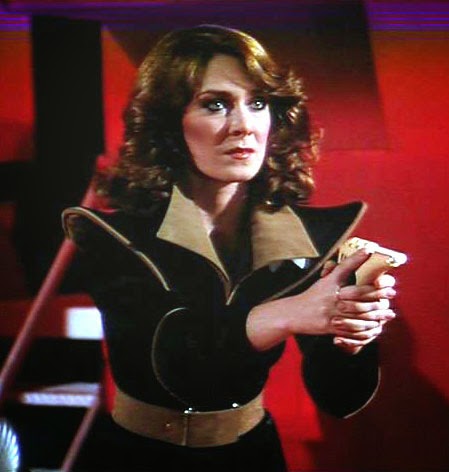 Our latest Space Babe is Eddie Benton (a/k/a Anne-Marie Martin), who starred in the 1979 Canadian-made space opera, The Shape Of Things To Come, as the resourceful roboticist Kim. She also memorably guest starred in the first season Buck Rogers In the 25th Century episode, "Twiki is Missing!" as a telekinetic troubleshooter named Stella. 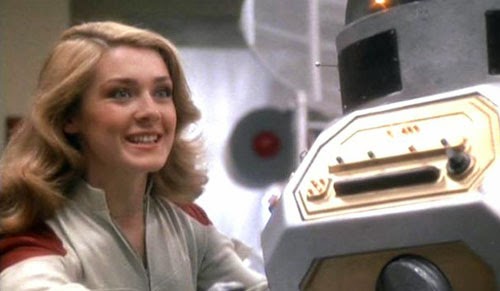 Born as Edmonda Benton in Ontario in 1957, the comely actress with astoundingly sexy legs appeared in a number of TV shows and films of interest to Space: 1970 fans during the late 70s and early 80s, including guest roles on Wonder Woman and The Powers Of Matthew Star. In 1978, she played Clea in the Dr. Strange TV movie. Apparently, she was one of the many young actresses that auditioned for the role of Princess Leia in Star Wars, too. In '81, she changed her name to Anne-Marie Martin, and retired from acting only a few years later.

From  1987 to 2002, she was married to best-selling novelist (and Westworld creator) Michael Crichton. When the couple split up, she reportedly received a 31 million dollar settlement. Needless to say, she now lives a life of leisure, devoting much of her time to keeping and riding horses.
Posted by Christopher Mills at 1:27 PM

Email ThisBlogThis!Share to TwitterShare to FacebookShare to Pinterest
Labels: Buck Rogers, Dr Strange, SpaceBabes, The Shape of Things to Come