The Adventures Of Lando Calrissian 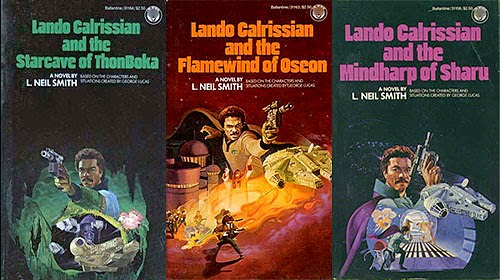 Like Daley's Han Solo books, these novels took place well before the events of the original Star Wars films, and were set off in corners of the galaxy that seemed to have little connection with the Imperial settings of the films. Unlike the Solo novels, though, the Calrissian adventure were just plain weird. Even when Lucasfilm was building and putting considerable effort into reconciling its "Expanded Universe," the events, characters and planets in these books were essentially ignored. Still, at the time of their release, there was damned little new Star Wars adventures to be had, and offbeat as they were, they were eagerly snapped up by young fans.

Plus, they had great cover paintings by Williams Schmidt.