• Five Years In Space:  This blog was five years old on November 2nd. Quite coincidentally, I'm sure, a couple of weeks ago, right in time for the anniversary, the Space: 1970 page on Facebook started getting dozens of "Likes" out of the blue. This was unusual, because the Facebook page has averaged only one or two "Likes" a month for years. Suddenly, there was a huge influx of new fans (presumably), and before too long, the page had surged past the 2,000 "likes" milestone. Needless to say, this sudden interest got me thinking about this site and how badly I've neglected it over the past year or so.

I recently wrapped up my two weekly webcomics (Perils On Planet X and the crime comic Gravedigger), and completed a couple other long-gestating writing projects. As I slowly clear my commitments from my desk, I'm looking forward towards the new year, and figuring out what I want to do next. One thing I definitely want to do is get back to regular posting here on this site.

I doubt I'll ever get back to the nigh-daily updates of a few years ago, but I'd very much like to manage a post two or three times a week. I have a surprising number of unfinished articles, dating back a couple of years. One of my goals is to finish those up, along with a few long-belated reviews (The Aliens Are Coming, Star Maidens, Beyond Westworld, Space Stars, Meteor, Saturn 3, etc.) and get back to some old features (like "Fave fives" and "Favorite Episodes"). I'm also considering doing an episode-by-episode review of The Fantastic Journey television series, one of the few shows from the era that's still not on DVD (many episodes can be found on YouTube, though). We'll see how I do over the next few months, I guess.

For what it's worth... I have been re-watching a lot of 70s sci-fi shows over the last few weeks.... 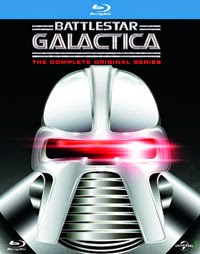 • HD News: Basically, it's all good news/less-good news on the hi-def 70s sci-fi front. Rumor has it that Universal will be releasing a Region 1 Blu-ray set of the original 1978 Battlestar Galactica in early 2015. That's the good news. The less-good news for some folks is that it will apparently not include any re-done CGI special effects (although it seems that they were considering it for a while), but will instead use the same HD masters as the German Blu-rays from a couple years ago.

To be honest, though, I'm kinda glad they didn't replace the effects with new CGI, no matter how nice and slick it might look. Part of my love for these shows is the handcrafted practical effects, and I'm glad they're being preserved.

The long-awaited second season Blu-rays of Space: 1999 appear to finally be on the way, as well. Network has announced that Year Two will be released on Blu-ray in the UK in the Autumn of '15. There will also be a standalone HD release of the two-part "Bringers Of Wonder" episodes.

Before American fans get too excited though, here's the less-good news: there has been no official word as yet about a Region 1 Blu-ray release through A&E, the show's US licensors.

• Stuff to Check Out: My virtual pal Rob Kelly has recently revived his Power Records blog, which means, of course, lots of cool Star Trek, Six Million Dollar Man, Planet Of the Apes and super-hero 45 rpm audio bliss, not to mention scans of the fantastic comics and album covers that graced these nostalgic faves. He's posting pretty much daily, so click over and visit.

I've mentioned it here before (a long while back), but I'm quite taken by what I'm seeing of Spectrum Games' Retrostar RPG, which endeavors to recreate the feel of the kind of 70s space operas we celebrate here at Space: 1970. I get a very strong Star Frontiers vibe off the thing, so you Old School gamers might want to give it a look.

• Space: 1970 Still Wants You: As mentioned in my last "Captain's bLog" (back in July!), I've always been open to - and grateful for - submissions from my readers. Now I want to outright encourage you folks to send me any cool Space: 1970-era stuff you might think would be interesting to your fellow Star Kids. Rare photos and production art, behind-the-scenes stills, nominations for "Space Babes" or Reader Polls, personal photographs of you and your friends with your favorite 70s sci-fi toys, pretty much anything, really. Hell, even if you'd like to write a Guest Post, just e-mail me. I'll do my best to credit any contributions I use, of course.