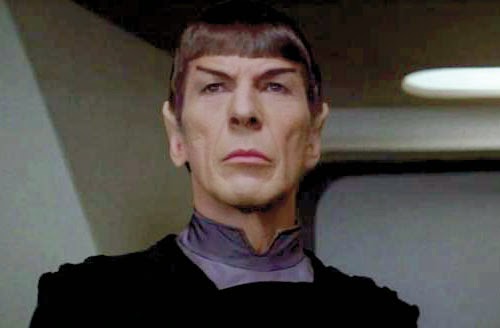 "Of all the souls I have encountered in my travels, his was the most human."

Actor Leonard Nimoy, who originated the role of half human-half Vulcan Science Officer Spock on the original Star Trek television series, has passed away at age 83, due to end-stage chronic obstructive pulmonary disease.

Nimoy reprised the role of Spock in the 1973 animated Trek series, eight feature films, beginning with 1979's Star Ttrek - The Motion Picture, and a couple of episodes of Star Trek: The Next Generation in 1991. (Not to mention countless cameos, videos and even some games.)  In 1973, he starred in the TV movie/pilot Baffled as a race car driver with ESP powers, and in '78 as Dr. David Kibner in Phillip Kaufman's remake of Invasion Of The Body Snatchers. From 1977 to 1982, he was the host of the syndicated documentary series, In Search Of....

Obviously, I am deeply saddened to hear of the passing of Leonard Nimoy. Star Trek is not only my favorite television series of all time, but it has had a huge impact in how I think and perceive the world around me. The character of Spock, as delineated by the talented Mr. Nimoy, represented rationality and scientific curiosity. Logic - tempered with the best qualities of humanity. Loyalty... and sly, sharp wit. Qualities that I aspire to (and, admittedly, rarely achieve).

In the 1990s, I worked tangentially with Mr. Nimoy as the scripter of the comic book series Leonard Nimoy's Primortals. My direct interactions with the man were few - we spoke on the phone a couple of times and only met face-to-face on one occasion - but I have in my files a memo from him praising my writing on the series. Rarely have I been so honored by a compliment.

A fine actor, writer and artist, his legacy will live long... and prosper.
Posted by Christopher Mills at 1:10 PM