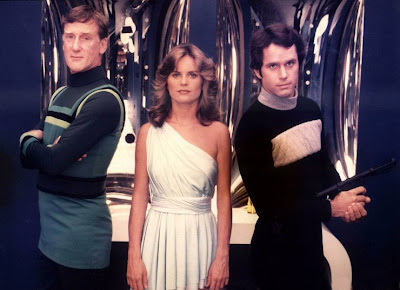 Starting in February, I'm going to start posting episode reviews of the Logan's Run television series from 1977. I have roughly two-thirds of the series here from old VHS recordings, and will be watching and writing up my thoughts on those shows here as a regular feature.

When I was a kid, I was a big fan of the TV series and the movie, which I have very clear memories of watching when it aired on network television. I even started to write my own "novelization" of the film, which I abandoned only after I found out there already was a book. Of course, the book was so different from the movie that I was both confused and a little angry.

Nowadays, I have great admiration for the trilogy of novels by William F. Nolan (who I've had the great fortune to correspond with in the past) and George Clayton Johnson (co-writer of the original novel).

Anyway, while I dread the prospect of a new Hollywood remake (which seems to be constantly under discussion), at least that would mean there would be a good chance of getting the TV series released on disc. And I'd like that.

Look for my Logan's Run reviews to begin in a couple weeks.
Posted by Christopher Mills at 2:41 PM