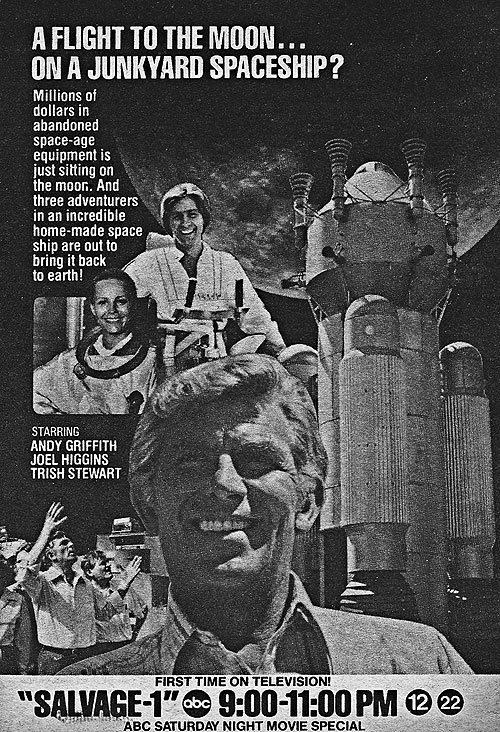 "I want to build a spaceship, go to the moon, salvage all the junk that's up there, bring it back and sell it."

The TV movie, Salvage 1, starring Andy Griffith, Joel Higgins and Trish Stewart, debuted on ABC on January 20th, 1979. The telefilm, which chronicled a salvage expert's attempt to build a spaceship and travel to the moon (to salvage all the stuff NASA's Apollo astronauts left behind, as noted above), was a surprise ratings smash.

The weekend it aired, I was staying at my cousins' house while my folks were on a snowmobiling excursion in Canada. I vividly recall commandeering the TV set and forcing everyone to watch the movie, which I, as I remember, I found incredibly engrossing. The characters were likable, the junkyard spaceship - named The Vulture - was oddly believable and the actual trip to Luna seemed entirely possible (Isaac Asimov, according to his own autobiography, was a scientific advisor). I haven't seen it since, though, so I have no idea how it would play today.

The ratings success of the telefilm led to a 20 episode (although only 13 were aired in its network run) Salvage 1 weekly series. I only saw a few of those, and I remember them being a real letdown, with mostly earthbound stories, and The Vulture being used only sparingly.

As far as I can tell, just two of the episodes are available as Manufacture-On-Demand DVDs from Sony, and neither is the pilot film. The titles available are "Golden Orbit" and "Hard Water," both of which originally aired as two-parters.