News: STARCRASH and BATTLE BEYOND THE STARS on DVD in September 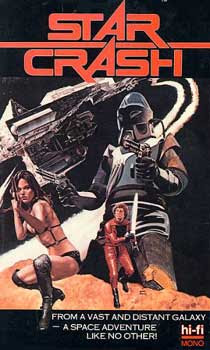 According to a report at DVD Drive-In, two of the announced titles in Shout! Factory's new arrangement with legendary exploitation film producer Roger Corman are new DVD and Blu-Ray special editions of Starcrash and Battle Beyond The Stars - both of which are due in the U.S. on September 7, 2010.

Since these are authorized editions and Shout! will have access to the Corman film library - and, presumably, master prints and/or negatives - I expect that these will be high quality transfers. Also, Shout! has a very good reputation for really going the extra mile on their releases both technically and in terms of supplements.

Both titles have been released before (there was an authorized version of Battle from Corman's New Horizons video, with a decent array of extras but a non-anamorphic, fairly-beat-up looking transfer, and various bootleg versions of Starcrash are floating around out there from different outfits, none of which look very good) but I expect these editions to blow those away.

Email ThisBlogThis!Share to TwitterShare to FacebookShare to Pinterest
Labels: Battle Beyond The Stars, Blu-Ray, News, Starcrash