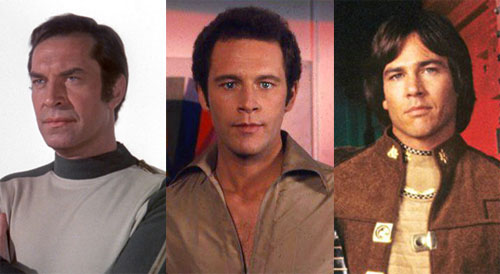 This past weekend, it was announced that actor Martin Landau, best known to readers of this site and children of the Seventies as the humanistic Commander John Koenig of Space: 1999, had passed away at the age of 89. A renowned performer, Landau's screen career began on television in the early 1950s, and included memorable roles on The Twilight Zone and The Outer Limits. After turning down the role of Spock on Star Trek, the actor became a household name with a three-year stint on the hit spy series Mission: Impossible, on which he co-starred with his then-wife, Barbara Bain. (Ironically, Leonard Nimoy replaced him on M:I when Landau left the show.)

In 1975, he and Bain co-starred on the British science fiction series Space: 1999. His role as the intellectual commander of Moonbase Alpha, an artificial habitat on the surface of the wandering Moon, was iconic. After a career slump in the Eighties, the actor received acclaim and Oscar nods in the 90s, with his  win for his portrayal of legendary horror star Bela Lugosi in Tim Burton's Ed Wood being especially notable.

As this blog was on hiatus for the last few months, I didn't post notices of the passings of two other Space: 1970 icons (although I did note them on this site's Facebook page.) I want to correct that now.

• On May 24th, Jared Martin, star of the 1977 sci-fi series, The Fantastic Journey, died at age 75. A prolific television actor, Martin not only portrayed the enigmatic, time traveling futurian Varian on Journey, but made guest appearances on The Incredible Hulk, Wonder Woman, Logan's Run and The Six Million Dollar Man. In the late Eighties, he starred as Dr. Harrison Blackwood on the War Of the Worlds television series for two seasons.

I always liked Martin - he possessed an otherworldly quality that served him particularly well in genre roles. He will be missed.

• Back in February, we lost Battlestar Galactica's original Captain Apollo, Richard Hatch. He passed away on February 7th, at the age of 71. As the heroic, responsible fighter pilot, Hatch's Apollo was a genuinely positive role model for 70s Star Kids, and his loss is heavily felt. His connection with the role and the show never faded; in the 90s he produced a "pilot film" for a proposed revival and co-authored several novels continuing the adventures of the Galactica and its multi-generational crew.

When the series was finally rebooted in the early 2000's by the SyFy channel, Hatch joined the cast as Tom Zarek, and provided the voice of Apollo for the 2003 Galactica video game.

I like to think that he has been taken aboard the Ship of Lights for an eternal journey among the stars...

Let's hope that I don't have to write any more obituaries this year.