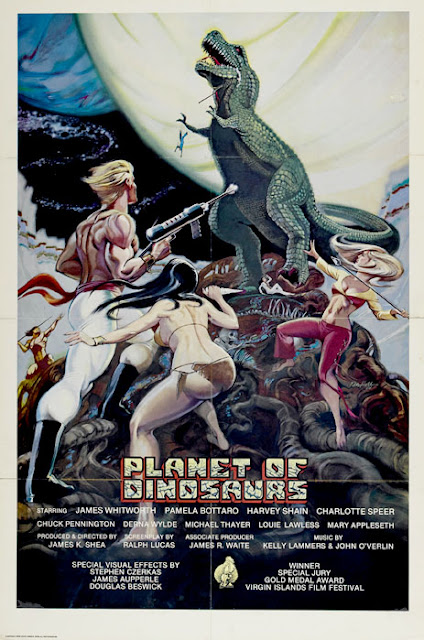 Uber-low budget sci-fi schlock saved solely by some stunning stop-motion animated prehistoric beasts, Planet of Dinosaurs chronicles the adventures of a group of starship crash survivors on an uncharted world populated by, well, dinosaurs. As they struggle to survive on the hostile planet, they find themselves plagued by the attentions of a ferocious Tyrannosaurus Rex, and soon come to the conclusion that if they are to have any future at all, the savage carnosaur has to go. 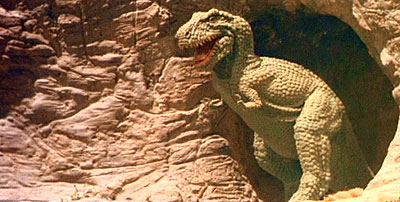 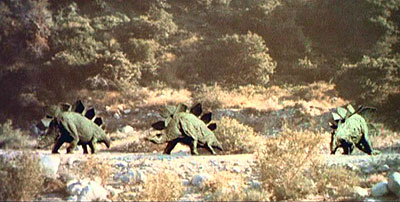 Retromedia’s 30th Anniversary Edition (although it says "20th" on the DVD cover) presents the film in 1.85:1 anamorphic widescreen, sourced from both 16mm and 35mm elements. Some parts of the film show serious damage, while the rest looks great. There’s a commentary track with director James Shea and effects artists Doug Beswick and Steve Czerkas, as well as a couple of vintage TV spots and two silent stop-motion shorts by King Kong’s effects genius, Willlis O’Brien.

Like I said, it's not a good film. But I've also been pretty honest on this blog in admitting that I can put up with a lot of crap in order to enjoy well-crafted, handmade special effects. And the stop-motion sequences in this film - if not quite up to Ray Harryhausen or Jim Danforth standards - are very well done and very enjoyable. The animation models are nicely detailed and move believably, and the animators even throw in a few nice homages to previous stop-motion films. There's a monster in one scene that's a dead ringer for Harryhausen's "Rhedosaur" from The Beast From 20,000 Fathoms, for example. 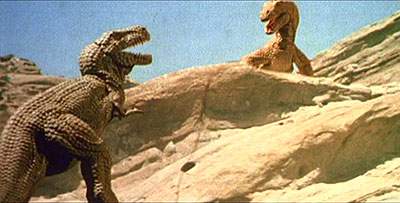 In fact, much of the animation footage from this feature has been cannibalized over the years by other low budget filmmakers (like Retromedia's proprietor Fred Olen Ray, who's used shots from Planet in several of his B-movies, including The Phantom Empire and Wizards of the Demon Sword).

Ultimately, it's only worth hunting down if you're an obsessive fan of 70s sci-fi and stop-motion animation... and I'm both.
Posted by Christopher Mills at 12:49 AM