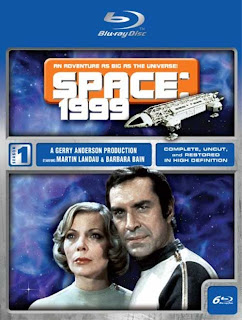 For Christmas, I received the new A&E Region 1 Blu-Rays of Space: 1999 Season One. I honestly didn't expect much from the HD upgrade (the show is 35+ years old, after all), and was initially more interested in the extensive bonus features.

But, I have to say that the high definition remasters are absolutely gorgeous. In a direct comparison to the A&E DVDs, the new transfers are remarkably, vastly superior.

Colors are truer and perfectly balanced, there is virtually no dirt or debris evident, and the miniature effects - by far the most impressive aspect of the show in the first place - look utterly fantastic, with rock-solid blacks and razor sharp detail. And I don't know if they went in and digitally removed the effects wires that were visible on DVDs, or if the new, high-contrast transfers simply hide them better, but on the handful of episodes I've watched so far, I haven't seen a single one - and I've been looking.

I haven't yet made it through all the bonus features, but the featurettes I've checked out have all been entertaining and informative. I'm looking forward to working my way through all of the supplements and re-watching all the episodes again. I had also forgotten that Sseason 2's debut episode, "The Metamorph," was among the extras (It wasn't listed on the package). It also looks beautiful in HD, and I'm eager to see the rest of Year Two make its way to America on Blu-Ray....

ADDENDUM: Amazon currently has the set at more than 50% off: Space: 1999: The Complete Season One [Blu-ray]

Posted by Christopher Mills at 4:33 PM