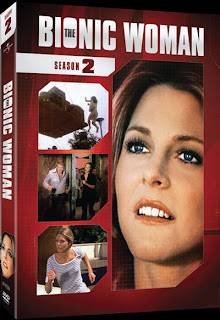 According to TV Shows on DVD, Universal has announced the second season of The Bionic Woman, starring Lindsay Wagner as Jaime Sommers, will be released on DVD on May 17th:


The 5-DVD set presents every episode, remastered, in full screen video and with English mono sound, plus English subtitles. Cost is $39.98 SRP.

Besides the featured episodes of The Bionic Woman, there will also be 2 cross-over episodes from The Six Million Dollar Man: "The Return of Bigfoot, Part 1" and "Kill Oscar, Part 2" (so that the complete multi-part story of each can be watched in order, with no having to switch discs to the DVDs of another program). You will also get other bonus material, including an exclusive interview with show star Lindsay Wagner. That's all the extras that the studio has officially passed along at this time, but we know from show creator Kenneth Johnson that he's already recorded a commentary track for the 2-part story "Doomsday Is Tomorrow", which aired during this season. We also know that actress Janice Whitby, who played "Fembot Katy" in the 3-part story "Kill Oscar", has recorded interviews about her role in that arc, so we expect that to be included as well.

Full details and a larger view of the package key art can be found HERE. I really loved revisiting the show with Season 1 (my review HERE), and am eager to add these episodes to my DVD library!
Posted by Christopher Mills at 9:37 PM