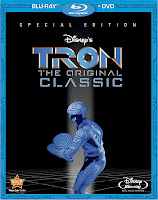 The groundbreaking original cyberspace epic from 1982, TRON, will be making its high-definition debut on Blu-Ray in April, released side-by-side with the much bally-hooed 2010 sequel, TRON Legacy (which I still have not seen, dammit).

A lot of online articles are making it sound like the original movie will only be available as part of various expensive combo packages with the sequel, but that's not the case.  TRON - The Original Classic will also be available individually, as a Blu-Ray/DVD pack.

The disc is available for pre-order now, of course: Tron: The Original Classic (Two-Disc Blu-ray/DVD Combo)

Posted by Christopher Mills at 5:16 PM