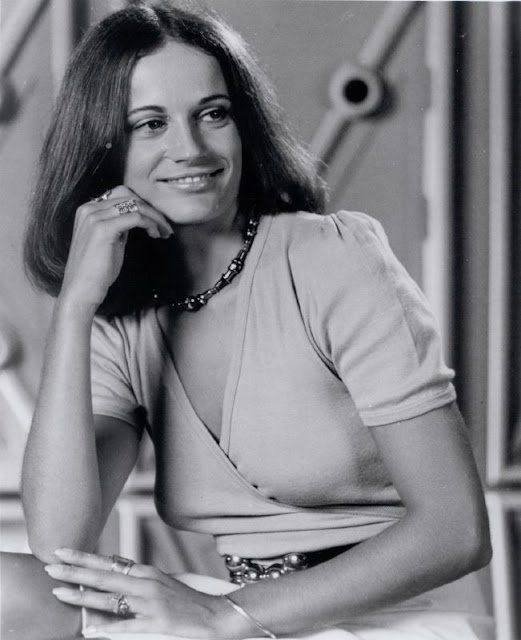 February's Space Babe is the lovely Gay Rowan as Rachel, from the 1973, Canadian-produced television series The Starlost. As a member of an Amish-like community who follows the man she loves into exile, forced to face the startling revelation that her world is just an artificial biosphere - one of many - on a gigantic space ark, Rowan's Rachel always exhibited a sense of wonder, a warm heart, and admirable bravery... all of which made her extremely appealing. The scripts and production values didn't usually give her or her co-stars (Keir Dullea and Robin Ward) much of an opportunity to showcase their talent, but Rowan was always likeable and came off well.

The Canadian actress was born in 1948 and had a few small roles in Canadian and American TV series for about ten years ('73-'83), but as far as I (and the IMDb) can tell, The Starlost seems to have been her only regular series role, and she hasn't made any film or TV appearances in almost 30 years. It's too bad. As I mentioned above, she was a very appealing young woman, pretty and intelligent, and deserved a bigger career. I wonder what became of her?
Posted by Christopher Mills at 4:55 PM

Email ThisBlogThis!Share to TwitterShare to FacebookShare to Pinterest
Labels: 1973, SpaceBabes, The Starlost