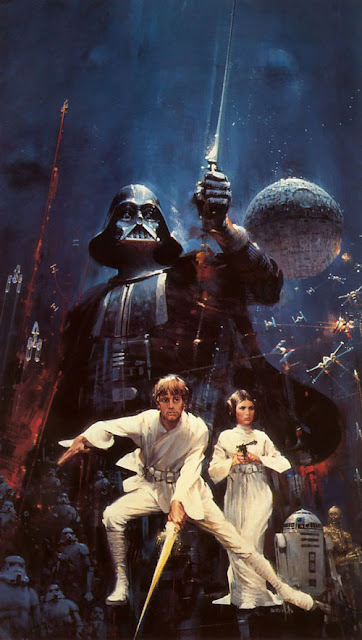 This familiar painting by John Berkey graced the cover of the Ballantine Books Star Wars novelization (penned by Alan Dean Foster writing as "George Lucas") through numerous paperback printings. But this is the first time I've come across it uncropped and uncluttered by text.

He also was the artist responsible for the beautiful X-Wing/TIE Fighter "dogfight" art print that was originally an insert in the Star Wars soundtrack LPs.

Reportedly, Berkey, who composed a couple of the most recognizable Star Wars illustrations of the era, never actually saw the movie! Over the next few years, he did create a few more pieces of art for the franchise, including art for Parker Bros.' Return of the Jedi "Death Star Battle" game cartridge in '83.

The artist passed away in April of 2008.
Posted by Christopher Mills at 4:24 AM