Not a lot new to report here; still buried in my comics writing commitments (including the Perils On Planet X webcomic), and still trying to carve out some time to finish up some longer posts. So, in short... new stuff on the way; stay tuned. 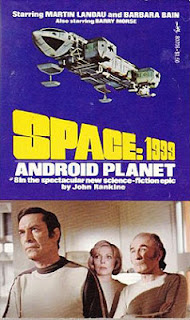 • It's possible that I'm simply not looking in the right places or that my Google-fu isn't as strong as I think, but I've been trying unsuccessfully to find a complete list of the Space: 1999 paperbacks published in the U.S. by Pocket Books (Year 1) and Warner Books (Year 2) online. Now that I have a (nearly) complete set of Battlestar Galactica (I'm still missing one volume - haven't found an affordable copy of # 9 yet) and Man From Atlantis novels, I'm now concentrating on filling in the gaps of my Space: 1999 library.

I'm not particularly interested in the Powys Media re-issues, or any modern/new novels; at the moment, I'm focusing on the 70s U.S. volumes. If anyone can direct me to a complete list, I'd appreciate it.

•  So... Best Buy didn't cancel my order properly (despite the fact that I cancelled it a full ten days before I received notification that it had shipped), and I frankly don't trust them to correctly refund my money if I try to return it, so I've got an extra copy of the Battlestar Galactica Blu-ray on my desk. Now I have to figure out what to do with it. Hmmmmm....

•  The Space: 1970 blog has seen huge amounts of traffic lately, due mostly to my post on that unused Star Wars poster art, which garnered links from a number of high-profile sci-fi fansites and on Reddit. The Star Wars Burger Chef commercial has proven popular, too. I only hope that some of these new visitors take a few minutes to explore the rest of the blog and maybe become regular followers. In related news, the Space: 1970 Facebook page now has nearly 1400 "Likes." Cool! The more Star Kids, the better!

•  Blatant Cross-Promotion: I want to remind you all again that my weekly sci-fantasy webcomic, Perils On Planet X, drawn by the talented Gene Gonazles, can be read for free at perilsonplanetx.com.  This serialized interplanetary swashbuckler has a new page posted every Friday, and chronicles the adventures of modern-day Earth astronaut Donovan Hawke, stranded on the lost planet of Xylos, hundreds of millions of years in the past. The story is packed with monsters, beautiful women and lots of Flash Gordon/Buck Rogers-styled thrills. I hope you'll check it out, bookmark it, and follow the comic each week.

Anyone who enjoys my writing and the reviews on this blog should check out my DVD Late Show site, where I have been reviewing B-movies, cult films and genre television shows on DVD and Blu-ray disc since 2005. Among the over 700 reviews on the site are plenty of Space: 1970-era favorites, like Battle Beyond The Stars, Damnation Alley, Starcrash, The Starlost, the Space: 1999 Blu-rays, and many more.
Posted by Christopher Mills at 3:56 PM