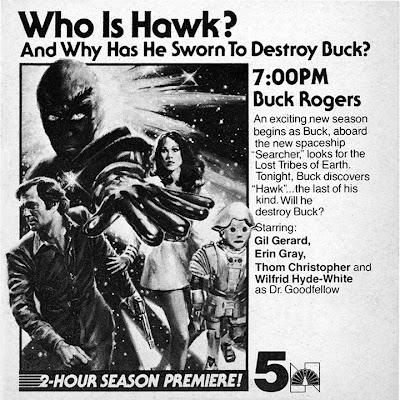 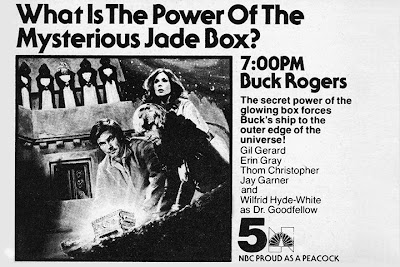 Thanks to Space: 1970 reader "Bishop37," here are two more vintage TV Guide advertisements from early 1981, promoting the delayed second season of the revamped Buck Rogers In The 25th Century television series. Both of these illustrations appear to be the work of the same unidentified artist who created the ad I posted a few days ago.

The top ad heralds the two-hour season premiere episode, "Time Of The Hawk," which introduced Thom Christopher as the series' new resident alien, avian humanoid "Hawk." The other is for the third episode, "The Guardians." When I was a kid, poring over TV Guide each week, planning my viewing schedule, I loved these kinds of advertisements, which always promised so much... which is one reason why I post them on this blog. They spark great memories from a less cynical time.

A bunch of Buck Year One TV Guide ads can be found HERE.
Posted by Christopher Mills at 3:54 PM