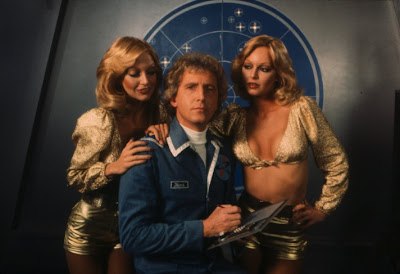 •  Once again, sorry that posting's been erratic over the last few months. I can't promise that I'll do better, but looking back over the blog history, it seems that I always slack off a bit in the Spring, only to rebound in the Summer with a flurry of activity. So, history's on my side. And I do have some cool stuff in the works. Specifically: a new Reader's Poll. A new "Fave Five." The long-promised DVD review of the Warner Archive edition of the 1975 sci-fi television pilot, Strange New World, the third and final installment of Warner Brothers' "PAX Trilogy." A look at the aborted Star Trek II television series from the point of view of this then-12-year old who was really disappointed when it didn't materialize. A review of the 1982  Antonio Margheriti genre mash-up, Yor, The Hunter From The Future, now available from Sony's manufactured-to-order DVD line. A Space Wars magazine cover gallery! Moonraker! Stay tuned, Star Kids!

• I still haven't gotten my hands on the David McCallum Invisible Man DVD set, but it's high on my wish list. If anyone's picked it up already, I'd appreciate a report on the picture and sound quality. The company putting it out is unfamiliar to me, so I'm wary.

•   Stats 'n Stuff: This site now has over 400 followers here on Blogger, and the Facebook Fan Page recently topped 900 "Likes." I genuinely appreciate the support! I also want to thank every person who has used the Amazon links on this site to make purchases of vintage sci-fi on DVD/Blu-ray (and the few who've made Paypal donations - if you'd like to contribute, there's a link in the right-hand sidebar).

•  Shameless Self-Promotion: Anyone who enjoys my writing and reviews on this site should check out my DVD Late Show site, where I have been reviewing B-movies, cult films and genre television shows on DVD and Blu-ray disc since 2005. Among the over 700 reviews are plenty of Space: 1970-era favorites, like Battle Beyond The Stars, Damnation Alley, Starcrash, The Starlost, the Space: 1999 Blu-rays, and many more.
Posted by Christopher Mills at 3:46 AM