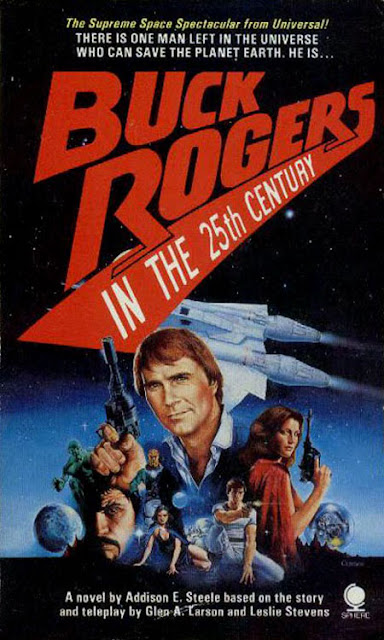 Today we have the covers of the two authorized Buck Rogers In The 25th Century paperback tie-in novels, published in 1979. Written by Richard Lupoff under the pseudonym "Addison Steele," these books are, frankly, awful. The first book is a novelization of the TV pilot/theatrical film script by Glen Larson & Leslie Stevens, and appears to be based on an early draft, as there are a number of differences between the book and movie.

I've read some fine nonfiction books by Lupoff (his Edgar Rice Burroughs: Master of Adventure is essential reading) but his prose here is awkward, clunky and amateurish. That said, I do like the cover painting, even though it looks like the Gil Gerard likeness was painted by a different artist, and I wish the starfighter wasn't obscured by the logo. 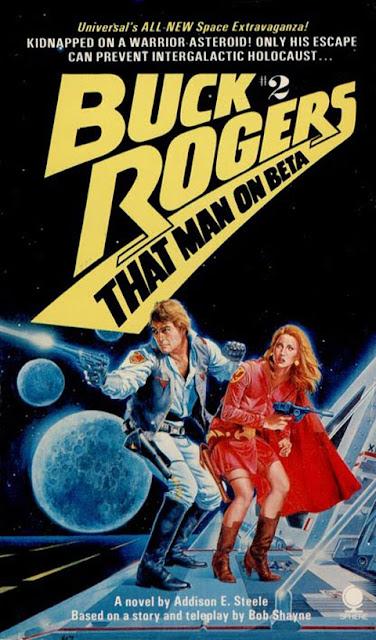 Buck Rogers: That Man On Beta is based on an unfilmed script or treatment by Bob Shayne, and is even worse. The characterizations are all off, the world portrayed in the book only vaguely resembles the world established on the show, and the writing style is, once again, a struggle to get through. The cover art has a nice, pulpy, space opera feel to it... doesn't look anything like Gil here, though.

Even though I coveted these books back in the day, I only managed to get my hands on them in the past year or so. While I'm glad to have them in my collection, I'm equally glad that I didn't pay too much for them.
Posted by Christopher Mills at 1:06 AM