I'm re-posting this article from 2011 because I actually found the photo mentioned in the story, and have updated the post accordingly. I also discovered that I had the year wrong - in the original post, I remembered these events taking place in 1976, but from the date stamped on the back of the photograph by the developer, it was actually the Spring of 1980.

Back in the Spring of 1980, when I was 16 years-old, my family took a vacation trip to Washington D.C. with a side trip to the Amish country of Pennsylvania. I was particularly excited to visit the Smithsonian's Air & Space Museum because I knew that the original U.S.S. Enterprise model, used in the filming of Star Trek, was on display there. Everything else about that trip was pretty much of secondary importance to me. What really mattered was getting to see that iconic starship with my own eyes.

Upon our arrival at the Air & Space Museum, I dragged my family right past the Spirit of St. Louis and the Wright Bros. plane - though I did stop briefly to examine the Apollo capsule they had on display - and headed for the "Life In The Universe?" exhibit, where, suspended from the ceiling, was the Enterprise in all her glory. With my little Kodak camera, I took almost a dozen photos of the starship, from just as many different angles, and marveled at being in the ship's presence. Eventually, my parents dragged me away, and I enjoyed the rest of my visit to the museum.

Unfortunately, when I had my film developed after our trip, I discovered that the camera had jammed, leaving me with a single print - of a dozen superimposed images of the Enterprise from a dozen angles. Oddly, the camera worked fine before and after I tried to shoot the model. Hmmm.... 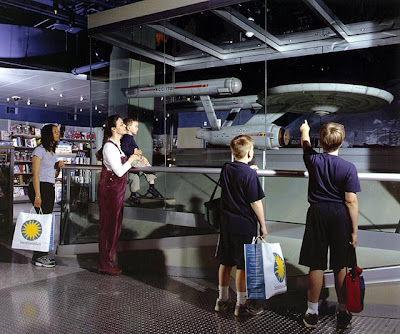 I understand that the Enterprise is still on display at the Air & Space Museum, although it's been repainted a few times and moved to the Gift Shop. One of these days, I hope to get back there and visit the great lady again....
Posted by Christopher Mills at 2:15 PM