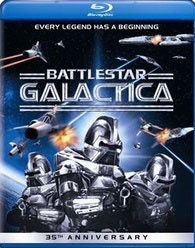 Looks like the earlier rumors are true. According to various sources, Universal will be releasing a high-def Blu-ray of the 1978 theatrical release version of the Battlestar Galactica pilot on May 14th, which they are labeling as the "35th Anniversary Edition."

As long-time fans know, in order to help recoup some of its high production costs, Universal released a theatrical version of the Battlestar Galactica pilot, "Saga Of A Star World," around Christmas, 1978. It primarily played in non-U.S. markets, but it got some domestic distribution too, the theatrical experience augmented by the studio's patented Sensurround audio process.

Very few details about this edition are available as yet. Presumably, this will be the matted, 1.78:1 widescreen version that Universal previously released on DVD. No bonus features or supplements have been announced. It also appears that it will be Best Buy exclusive, so bear that in mind if you want to pick it up. (It's already on their website for pre-order HERE.)

I'll be buying it for sure.
Posted by Christopher Mills at 2:58 PM