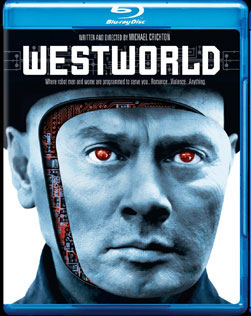 In his lifetime, best-selling author Michael Crichton saw many of his popular novels turned into movies, including The Andromeda Strain, Congo, Sphere and Jurassic Park. But not content to simply turn his stories over to others to interpret cinematically, Crichton also directed several movies himself, and turned out to be a rather fine filmmaker. His first feature, Westworld (1973), has recently received the HD Blu-ray treatment from Warner Home Entertainment.

Set in the then-near future, Westworld tells of a high-priced amusement park/resort called Delos. Divided into three worlds - Western World, Medieval World and Roman World - the proprietors of Delos offer perfect recreations of their themed environments with remarkably lifelike androids that allow their guests the opportunity to indulge almost any whim. The androids are programmed to serve, are unable to harm a human being, and according to Delos' army of technicians, are utterly infallible. Of course, something goes wrong, as Western World guests Peter Martin (Richard Benjamin, Quark) and John Blane (James Brolin) discover when their Wild West fantasy is transformed into a nightmare by a homicidal, black-clad robot gunslinger (Yul Brynner, The Ultimate Warrior).

Westworld is a corker of a science fiction thriller, with a simple, straightforward plot (a variation of which Crichton later used for his novel, Jurassic Park), plenty of imagination, great performances, and an appropriately paranoid view of technology. The movie was a relatively low-budget effort - the three "worlds" were picked because of the easy availability of pre-existing costumes, props and sets - but it never looks especially cheap, thanks to Gene Polito's cinematography and Crichton's ingenuity. Benjamin and Brolin make engaging protagonists, and the charismatic Brynner - wearing his iconic Magificent Seven cowboy costume - makes an effective, impressive killing machine.

Space: 1970 fans will also note that Alan Oppenheimer, who played Dr. Rudy Wells on The Six Million Dollar Man (as well as the the voice of Ming the Merciless in Filmation's Flash Gordon) plays the lead Delos roboticist, and Star Trek's Majel Barrett appears as the proprietor of Western World's cathouse!

The new Blu-ray from Warner Home Entertainment presents Westworld in fine form, with a lovely 1080p, 2.4:1 widescreen transfer from a near-pristine source and crystal clear DTS-HD Master Audio. The film's 70s color palette looks accurate, and fine detail is very good. It won't be mistaken for a 2013 sci-fi opus, but for a 40 year-old catalog title, it looks exceptional and is a marked improvement over the previous DVD editions.

Warner has also included a couple of bonus features - and one of them is a real gem. In 1980 the CBS television network aired a very short-lived TV series spin-off called Beyond Westworld. Only five episodes were made, and the show was cancelled after just three of those five had aired. The premise was that a rogue Delos scientist was using the android technology to replace real people in positions of power in a bid to take over the world (a continuation of plot threads developed in the 1976 theatrical sequel, Futureworld - Blu-ray review on the way). A Delos security agent (Jim McMullen) was assigned to hunt down the imposter androids and foil the evil robot master's plot. In a surprise move, Warners has included the complete 90-minute pilot episode on the disc. Beyond Westworld is presented in standard definition at its original television 4x3 aspect ratio. It's not great, but it is fun to see this all but forgotten program unearthed.

The only other extra is the original Westworld theatrical trailer.

Westworld is a classic 70s science fiction film, imaginatively conceived and directed by Crichton. The Warner Blu-ray is beautiful to look at and the inclusion of the Beyond Westworld pilot is a treat for fans. Highly recommended.

Email ThisBlogThis!Share to TwitterShare to FacebookShare to Pinterest
Labels: 1973, Westworld