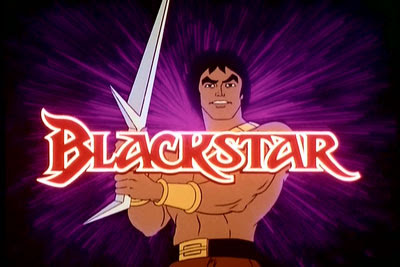 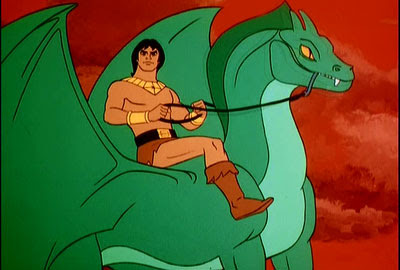 Blackstar (1980-81) was probably the last Filmation cartoon I remember actually getting up early to watch. I was into D&D then, and anything with a sword & sorcery theme caught my interest. Unfortunately, if I recall correctly, it aired in the same timeslot as Ruby-Spears' superior Thundarr The Barbarian on another network, so unless Thundarr was a repeat, I usually opted for the post-Apocalyptic barbarian over the sword-slinging astronaut, John Blackstar. 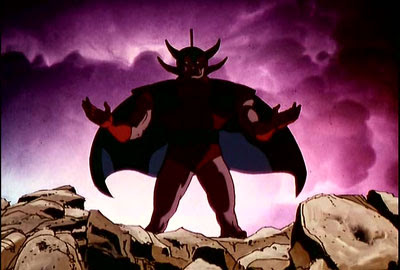 Loosely inspired by interplanetary romances like Edgar Rice Burroughs’ "John Carter of Mars" pulp stories, Blackstar tells of an American astronaut, who, after passing through a black hole, finds himself stranded on the primitive planet Sagar. The planet is ruled by the evil, Darth Vader-esque Overlord, and opposed by a motley band of freedom fighters, including the sorceress Mara, shape-shifter Klone, and seven pink "trobbits." John Blackstar somehow comes into possession of the Starsword (an adventure never related on the series), a mystic blade that can be combined with the Overlord’s Powersword to become the Powerstar – an ultimate weapon that the Overlord desperately covets. 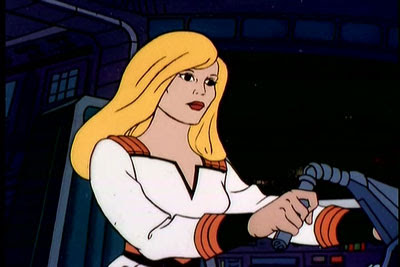 Watching it today as a 40+ adult, I find that Blackstar is actually somewhat better than I remembered. The animation still looks pretty slick and, oddly enough for a Filmation adventure show, uses very little, if any, rotoscoping. The character designs and background paintings are excellent, really selling the alien environment of planet Sagar. The scripts – mostly by animation and sci-fi veterans J. Michael Reeves (Batman - the Animated Series) and Marc Scott Zicree (Sliders) – are fun and fast paced. I still hate the little pink "trobbits," though, and prefer the episodes that play down their child-friendly antics.

My favorite episode is probably "Shipwrecked," written by Reaves, where Blackstar's old fiancee - also an astronaut - follows his ship's trajectory through the black hole to Sagar. Of course, she's captured by the Overlord, who wants her starship's technology. She is rescued by - and reunited with - Blackstar, but is ultimately forced to leave Sagar without him. The best part, though, is that when she emerges from the black hole to her own side of the galaxy, she contacts Earth command and sets them to work preparing an invasion fleet! She wants to go back to Sagar in force and bring her fiance back! Unfortunately, that intriguing plot thread is never revisited during the remainder of the series. 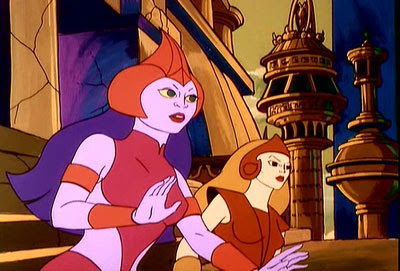 A few years back, before BCI/Eclipse went wherever it is defunct video labels go, they released the complete series on DVD. The full-frame transfers are excellent; the source material on Blackstar looks much better than the prints used on their previous Flash Gordon set, with bright colors and virtually no visible debris or damage. Extras include an informative booklet of liner notes, writer and producer commentaries on two episodes, on-screen interviews with many of the creators of the show, two image galleries, and "The Magic of Filmation" documentary.

If you're nostalgic and want to revisit your childhood – or know kids who are into fantasy adventure – Blackstar is well worth hunting down and picking up.
Posted by Christopher Mills at 10:00 PM