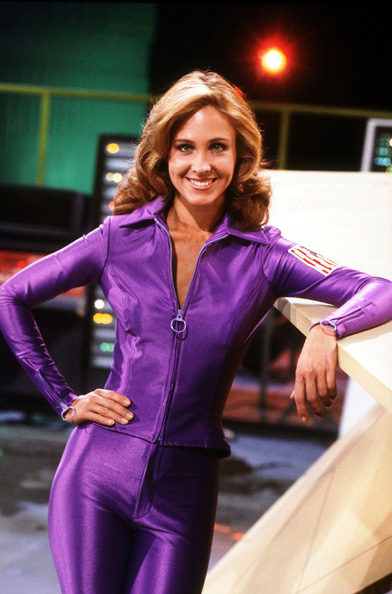 Erin Gray as Colonel Wilma Deering in the 1979 feature film and television series, Buck Rogers In The 25th Century. Ms. Gray's appearance here is probably long-overdue, as there's no question that for many - if not most - of us who entered adolescence in the 70s, it was her and her shimmering, skin-tight spandex outfits that flat-out defined "space babe."

And she was more than a pretty face and figure. In the first season of the series, she was Earth's first line of defense, in charge of the planet's starfighter squadrons. She was smart, competent, charming, funny, flirty - and pure dynamite in a dogfight.

Erin Gray, a successful and popular print model, went from Buck Rogers to a steady career as a popular guest star on television and in film, and was a regular on the sitcom Silver Spoons. I've heard that she and Gil Gerard are participating in the forthcoming Buck Rogers web series. I can't wait to see it.

I got to meet Ms. Gray about seven years or so ago at the MegaCon convention in Orlando, and I was surprised to see that she'd barely aged a day, still beautiful and charming. She was very gracious, even when I stammered out something about having her picture pinned up in my bedroom when I was a teen, and signed a photo for me that hangs in a place of honor on my wall.
Posted by Christopher Mills at 1:13 AM